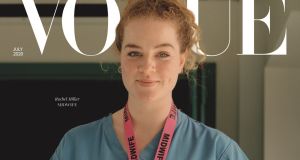 Vogue, July edtition: Rachel Millar (24) from Cookstown – ‘Everyone that was working on shift that day got a portrait taken’

A midwife from Co Tyrone has described her shock at ending up on the cover of fashion magazine Vogue after an impromptu photo shoot in the hospital where she works.

Rachel Millar (24) from Coagh, near Cookstown, was one of three women chosen to front the latest edition, which celebrates frontline workers during the coronavirus pandemic.

“It’s insane,” she told The Irish Times. “It’s not really every day you see your face plastered over the news and social media.”

A community midwife at Homerton hospital in Hackney in east London, Millar had been looking after a woman in labour when she left the room to get something.

“There was a photographer there and they herded us in front of the camera, and everyone that was working on shift that day got a portrait taken.

“We got no hair and make-up like the celebrities usually get,” she laughs.

“At the time, all we knew was that Vogue was doing a feature on key workers during the pandemic and it wasn’t until a few weeks later they decided what portraits would be on the cover.”

For weeks, she kept the secret. Her family and friends, she says, “were as shocked as I was, only I had a month to get used to the news.

As well as Millar, Narguis Horsford, a train driver on the London Overground, and Anisa Omar, who works in a supermarket in King’s Cross in London, also have their own covers in the July edition.

The editor-in-chief of British Vogue, Edward Enninful, wrote that he could “think of a no more appropriate trio of women to represent the millions of people in the UK who, at the height of the pandemic, in the face of dangers large and small, put on their uniforms and work clothes and went to help people.”

For Millar, the best part has been seeing other areas of the health service being appreciated.

“It’s really nice to see other departments like the intensive care, places that are sometimes overlooked, for them to get the recognition they deserve.”

Like all healthcare workers, her job has changed as a result of the coronavirus pandemic.

“We’re gowned up in the PPE [personal protection equipment] for deliveries, so I think for women it looks a bit more scary because we don’t look as friendly as we usually do with face masks on.

“Partners aren’t allowed to come to antenatal appointments or scans, and obviously the scan is usually a huge part of the pregnancy, so that’s really hard for them. But these are just the measures we have to take to protect them and us.”

She describes herself as “quite a calm person”; this, she thinks, has helped her cope. “There have been moments when it does get on top of you, I think everyone’s struggled in the lockdown, but overall I think I’ve been managing fairly okay.”

Vogue will be in the shops on Friday, and sales are expected to be brisk in the Cookstown area. “My Mum will be buying every one in Tesco,” says Millar.