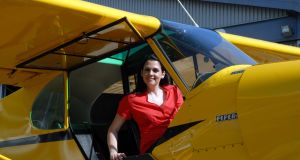 Ciara O’Toole: ‘Anyone thinking of moving to Italy should be aware that fluent Italian is a must’

When marketing specialist Ciara O’Toole moved to Lake Como in Italy, she didn’t think she would be flying solo, but that’s exactly what she ended up doing, both in life and in the skies above its glistening water.

She grew up in Blessington, Co Wicklow, and went to school in Templeogue, Dublin. After finishing school in 1992, O’Toole studied commerce in UCD before attending UCD Smurfit Graduate Business School to complete a marketing postgraduate, finishing up in 1996.

“I went to Australia after college for a year, but then returned to take on various contract marketing roles, from marketing manager for L’Oréal Paris in Ireland to consumer planning director for Diageo with Initiative Media, and marketing manager for the Irish National Lottery, brand manager for Johnson & Johnson and other consumer-targeted roles.”

In 2004 O’Toole set up her own marketing consultancy, The Cat’s Pyjamas, focusing on strategic marketing, business planning and leadership support.

“It’s been my bread and butter job ever since.”

But rather than stay in Ireland during the Celtic Tiger boom, she and her then husband moved to Italy in 2006 to start a new life. “I was working remotely, but was also back and forth to Ireland a lot, taking on contract and short-term troubleshooting roles,” she says.

“It’s funny to think back because social media and the internet wasn’t as advanced as it is now. I had a little gremlin connected to the computer, and there wasn’t much social media. But the phone and internet was enough to work.”

After six months her marriage fell apart and O’Toole decided to stick with her new life. She found a new pastime, which was to lead to new objectives.

“My house is right on the lake, and I’d watch the seaplanes landing on its waters, so I decided to learn how to fly small, single-engine seaplanes and amphibians.” O’Toole completed her training in Italy and Ireland, gaining a licence for planes that can land on land and on water.

After getting your licence, you have to do a certain number of hours flying each year, or complete a skills test. “It’s pretty rigorous. The licence itself is yours for ever, but you need to keep training and flying otherwise they won’t let you up.”

O’Toole took an advanced training course in January. “I learned how to land in places where there’s no runway. Kind of like bush pilot training. It was great fun. But normally when I fly, I hire a plane for an hour and fly around the lake. It’s a very beautiful place, so it’s always a joy.”

Her passion for flying inspired her to write a book, Going Solo on Lake Como, which was published in 2013.

“I had a great time with it. I published it myself, so there was no pressure from publishers. It took me a few years to write it. Essentially it’s my own story of getting over marriage break-up and learning to fly.”

Her fascination for aircraft was to inform further career choices and, in 2018, a dream job as marketing manager on the Austrian global board of Red Bull Air Race in Salzburg came up.

“It was the best job in the world. The Air Race was a championship with 22 of the world’s best pilots, flying at events around the world, competing to navigate challenging obstacle courses in the fastest time. So I got to travel and meet some amazing people.”

In 2019, however, the Air Race was cancelled by Red Bull, and O’Toole moved back to Lake Como. Since then she has written another book and become a board member of Aero Club Como, Italy, the oldest seaplane organisation in the world, while still working on marketing consultation, bespoke training and troubleshooting.

In spring 2020, during a work contract in Ireland, news was coming across the airways that Lombardy, where Lake Como is, was the epicentre of the European Covid-19 outbreak.

“I went to Ireland last year on February 19th to work on a short contract, and ended up staying until July. It was just horrific seeing what was happening, people I know getting sick and dying, cities getting shut down, morgues filling up.”

She returned to the region last summer, when the worst was over and lessons were learned. “People don’t leave the house without a mask. Even outside, they wear them. At Christmas time, we were pretty much locked down – more so than Ireland. It’s been a tough year here, but hopefully soon, with spring coming and vaccines on the horizon, people are optimistic about normal life resuming again soon.”

Like many Irish abroad, O’Toole is planning to come back to visit as soon as she can and her parents are vaccinated. “I want to really enjoy being home again, so we’ll just have to wait and see when that will happen.”

She knows Irish people living reasonably close to Como but spends most of her days speaking Italian. “I learned it early on and pretty quickly. You simply have to. Anyone thinking of moving to Italy should be aware that fluent Italian is a must.”

“Once you have that down, you can enjoy the slow and steady pace of life the lakeside paradise has to offer.”