We weigh up some possible contenders, from Nadiya Hussain to, er, Jeremy Paxman 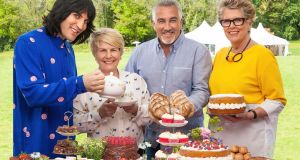 Once again, things are going wrong for The Great British Bake Off. It only seems like yesterday that the show ditched BBC One for Channel 4, shedding its most beloved personnel in the process. And now things have taken a dive once more. Sandi Toksvig, the woman brought in to shore up Bake Off in the absence of Mel and Sue, has announced that she too is leaving the series.

In a statement, Toksvig said: “As my waistline will testify, Bake Off is an all-consuming show. Spending time with Prue, Paul and Noel has been one of the great pleasures of my life. These are friendships which I know will continue beyond the confines of television.” Which is nice and all, but it isn’t going to bring her back.

With a new series of Bake Off set to air later this year, the clock is ticking to find her replacement. Who should it be?

Even in its diminished capacity on Channel 4, Bake Off is still a plum job for a host to have. Imagine the joy of seeing, say, Claudia Winkleman step up to replace Sandi. Or Melanie Sykes, for that matter, who has been doing a terrific job on the basically identical Great Pottery Throw Down on More 4. If the channel want to keep things within its own stable, they could always pick Richard Ayoade – who has a long working history with Noel Fielding – or Davina McCall or Steph McGovern or Big Narstie. Jeremy Paxman dabbles with Channel 4 from time to time. Could this be a job for him?

There is, of course, the opportunity for Bake Off to utilise its greatest asset, which is its army of former contestants. Perhaps Nadiya Hussain could bring some behind the scenes knowledge to the front of the show. Or Selasi Gbormittah. Could Rahul Mandal’s nerves hold up for long enough to keep him in front of camera? What about Candice, Tamal, Howard, Mary-Anne, or any of the others? If nothing else, they’d be much cheaper than a seasoned presenter.

Remember back when the new Bake Off line-up was announced, and you saw that Noel Fielding was going to host, and you remembered the nothingy whimsy of Noel Fielding’s Luxury Comedy? Remember how appalled you were to learn that your beloved cake show was going to be presented by a man whose only contribution to culture was a kind of mindless burbling psychedelia? And then remember when you first saw Fielding presenting Bake Off? Remember how amazing he was? Remember how bad you felt for never noticing his perfectly judged sense of warmth and charm? Now ask yourself this: would it be the end of the world if Fielding presented The Great British Bake Off alone? Of course it wouldn’t. It would be excellent.

The nuclear option for Bake Off, of course, would be to sack Fielding too and spend all the money on Earth to regain the services of the show’s original hosts Mel and Sue. It isn’t unthinkable that they would, nor is it unthinkable that Mel and Sue would accept. However, it is my opinion that this should not happen. Bake Off has moved on without Mel and Sue. True, the magic of the old days has started to fade, but not even Mel and Sue could revive it at this point. In this instance, we should probably let bygones be bygones.– Guardian