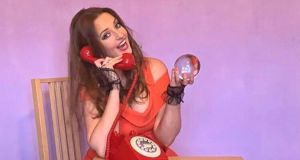 Psychic Sylvia: everybody is looking for answers to the same questions

Paula Gahan, who is from Kildare, lives in London. She works as cabin crew for an international airline but has been furloughed for more than seven months. Like many people in Britain, she needed to top up her income with a second job, so she became Psychic Sylvia

Recently I was having one of those moments that I was glad my ex couldn’t see. I was sitting in the torn dressing gown I got from Primark six years ago. It smelled of biscuits and ham. (How it smelled like biscuits and ham when I couldn’t remember eating any biscuits and ham, I’ve no idea.) I was 34 and working as a telephone psychic. I had just caught my reflection in the window and had one of those horrible moments of realisation. Oh my God, I’m a complete failure.

I have come to realise that nearly everyone feels like a complete failure. How do I know that? Because throughout the first lockdown here I worked as a phone psychic to supplement my furlough pay. Just to be clear, I’m not psychic: I was a phoney phone psychic. For three months I was in the privileged position of being able to hear people’s deepest fears, worries and problems. The amazing thing I learned was that people around the world are all looking for answers to the same questions.

If some people didn’t ring Sylvia’s Psychic Line soon, I wouldn’t be able to pay the rent on my crappy shoebox in outermost London

To make myself feel a little better about the ruse, I’d square it up in my head by just giving callers the sound advice I’d give a friend. You know those thoughts you have? The deepest, darkest ones you’d never tell anyone about, because no one else on earth could ever think such things and you’d be locked up if anyone found out? People were telling me all those three-o’clock-in-the-morning thoughts they’d never uttered to another soul. I was just a random person down the line who they’d never see or have to talk to again.

Here’s one thing I learned that made me feel a whole lot better about my situation: almost all of my callers were afflicted with the idea that they’re “not where they should be”. Without realising it, we’ve been programmed to feel like we’re falling short. Instagram, Facebook, Twitter, reality TV, the Kardashians, self-help gurus, The Secret and the Kardashians (they deserve an extra mention) have all contributed to make us feel that we are not measuring up. We missed the boat, lost the opportunity, didn’t work hard enough, didn’t fill in our gratitude journals or do our morning meditation.

But I hadn’t had that epiphany yet as I stared at my reflection in the window one morning. I’d been waiting for a call for an hour. If some people didn’t ring Sylvia’s Psychic Line soon, I wouldn’t be able to pay the rent on my crappy shoebox in outermost London.

The phone rang. Thank God. “Hello, is that Psychic Sylvia?” That was my stage name, Psychic Sylvia. I had a stage voice, as well. I mean, I could have just used my own – the old Irish accent works wonders when you’re abroad – but for this I put on a sort of mid-Atlantic twang, like the female, psychic version of Cary Grant.

“Yes, this is Psychic Sylvia. How can I help you?”

Most people know exactly what they should do. A lot of the time I just listened, and they came up with their own solutions. Like Dorothy in the Wizard of Oz, you are wearing the ruby slippers, and had the power all along

It was always women ringing my psychic line. I think I had one man in the whole time I was doing it. Possibly it was just a woman with a manly voice. And the callers were always asking about men. This is the number-one answer that no one wants to hear: He will never leave his wife for you.

While I’m at it, I might as well give you the benefit of everything else I learned.