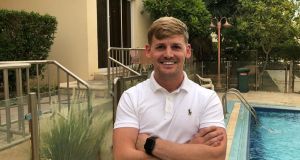 Michael Gilmore: “I love and miss Ireland . . .but I work in real estate and Saudi Arabia is developing the biggest and the best projects in the world, so it’s the right place for me now.”

A random decision during a night out to move to Dubai in 2013 kickstarted Michael Gilmore’s successful career in executive recruitment in the Middle East.

Originally from Galway, Gilmore graduated from NUI Galway with a degree in law and economics in 2011. He went straight from college to manage the family -owned Cellar Bar in the city.

“When your father owns a few pubs, it means you always have work, so it was a natural progression. But I wanted to get away and, in June 2013, a friend and I caught a flight to Dubai with pretty much zero knowledge of what we were going to do,” he says.

“We didn’t have jobs lined up. We arrived in the middle of Ramadan, which meant no one was hiring. It was 50 degrees and everything was closed, so it wasn’t a great start.”

After sending out CVs for seven weeks, a friend got him an interview with the CEO of Morgan McKinley recruitment firm.

“I started off reading CVs. Then I went on to be a consultant after a year, and associate director after three years.”

It was a speedy ascent.

“I was responsible for recruiting qualified professionals for the property and construction middle and executive management roles for a number of multinationals and SMEs across the entire GCC [Gulf Cooperation Council consisting of Bahrain, Kuwait, Oman, Qatar, Saudi Arabia and United Arab Emirates] region and into the Middle East and North Africa.”

In 2016, the company was purchased by Cooper Fitch, one of the leading executive search and recruitment agencies in the UAE and Saudi Arabia.

“I was promoted to managing partner. Things were going great, but after a year and a half, I wanted to go out on my own.”

After four years in the Middle East, Gilmore set up Jordan Forde – an independent recruitment agency for the property and construction sector.

“Despite being based in Dubai, I worked across the GCC sourcing and placing C level candidates and director level with the world’s leading property developers.”

In the summer of 2019, he was headhunted by the Public Investment Fund, one of the largest sovereign wealth funds in the world and the key driver for Saudi Vision 2030.

“It was an opportunity I couldn’t turn down.”

Under the patronage of HRH Prince Mohammed bin Salman bin Abdulaziz Al-Saud, the fund was set up to develop integrated giga projects in the country. Gilmore was offered an opportunity to overlook recruitment for the Amaala 7 star destination on the Red Sea.

“Amaala comprises three communities based on the pillars of art and culture; wellness and sports; and sun, and sea and lifestyle, We have hundreds of jobs to fill which will increase to thousands once we get into the operations stage of the project.”

The first phase of Amaala is targeted for completion by 2023.

“I will be looking for development directors, project directors, directors of hospitality, director of infrastructure with a key focus on Saudi and global talent.

“It’s a massive project. Currently the build is in the enabling phase, which means it’s getting ready for construction.

“Its main focus will be on sustainability, with solar energy farms, waste water management and recycling, and preservation of the coastal ecosystem. The resort plans to offset zero carbon emissions, while offering unrivalled luxury.”

Amaala is for ultra-high net worth individuals, who like to experience something completely different. But in terms of work, there will be opportunities for many.

It’s an exciting time to be in Saudi Arabia, he insists.

“Saudi Arabia is where the opportunities will happen in future. There is a great energy here and the international community is growing.”

Gilmore lives in a compound in Riyadh, which is home to expats from all over the world.

“So the opportunity to network is amazing. We swim, play table tennis, football and have BBQs at the weekend. We plan to explore more of the Saudi landscape this year so we have got ourselves a jeep to do some dune bashing.”

Gilmore says members of the Irish community attend the Irish Embassy regularly. “It’s great to be looked after by Irish people, watching rugby, football and anything Irish that makes us feel at home.

“I love and miss Ireland, where I just spent five months during the lockdown enjoying Galway, cycling around Connemara and catching up with family and friends. But I work in real estate and Saudi Arabia is developing the biggest and the best projects in the world, so it’s the right place for me now.”

Anyone interested in moving to Saudi Arabia these days will need to secure a job before moving, he says.

“Subsequently, you will receive an invitation letter and thereafter you will need to work with the Saudi embassy in Dublin to grant your entry visa.

“This will allow you to enter Saudi Arabia and obtain an Iqama – the name of the visa. Most companies will require a degree so please keep this in mind as you apply for any jobs,” he adds.

Gilmore says the opportunities he has had in the Middle East would not have happened in Ireland.

“I’d be working on a much smaller scale, not massive projects like Amaala. I’m really excited to see what’s going to happen. The next few years are going to be really exciting.”

Work from home in a picture perfect Wicklow country garden for €1.35m
3

Tell Me About It: ‘Why am I the one always left alone?’
5