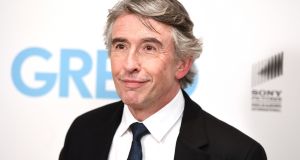 Comedian Steve Coogan has applied for an Irish passport, he has told The Irish Times. “My Irish passport will be arriving shortly. That’s not a joke,” he tells Donald Clarke in an interview in Saturday’s Ticket magazine.

Coogan, from Manchester, describes himself as “half-Irish”. His mother grew up in Mayo and he spent many summer holidays there. In 2013, Coogan co-produced and played a lead role in the film Philomena, starring Judi Dench as an Irish woman who had given birth in a mother and baby home.

Last year he developed an Irish character, Martin Brennan, a west of Ireland farmer who is the Irish double of Coogan’s best known comedy creation, Alan Partridge. As Brennan, he sang Come Out, Ye Black and Tans in an episode of This Time with Alan Partridge. His rendition became an immediate YouTube hit and made Brennan a social-media icon.

Coogan says his mother was “concerned” at the Black and Tans sketch, but “was relieved that people thought it was great”.

He himself felt he was on safe comedic ground. “There was a joke there: I wonder if we can get an Irish rebel song on prime time television.”

The song has since achieved even greater notoriety. Following objections to a proposed commemoration of the Royal Irish Constabulary, it reached the top of the iTunes charts in Ireland and Britain, and was also sung by supporters of Sinn Féin TD Dessie Ellis at the Dublin count for recent general election.

Coogan appears in Michael Winterbottom’s Greed, which is released in Irish cinemas today.

Richie Sadlier: ‘I’ve learned the best strategy for me is to limit my thoughts to today’
Real news has value SUBSCRIBE