The decision to move abroad, or to come back, has many reasons behind it, both personal and social 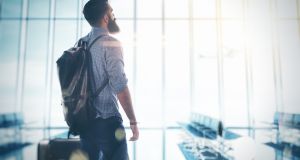 ‘With over 80 per cent of post-crash emigrants under the age of 35, Ireland’s marginal rates on high incomes are a concern for only very few of those who have moved abroad... personal tax pales in comparison to healthcare costs, housing costs, utility costs, and the everyday cost of living.’

Since Mary Robinson raised it to our emotive national consciousness in 1995, we use the word “diaspora” when we talk about the Irish abroad. In Dingle last week for the “Ireland’s Edge” conference at Other Voices, it struck me that we have no Irish word for diaspora, except the disappointingly transliterated “diaspóra”. The best Irish word I could think of was “deoraíocht”, our word for “exile”, with echoes of the Irish for tears. In Donegal there is a place where families traditionally said goodbye to their emigrants called Droichead na nDeor; the bridge of tears.

There will be tears aplenty in airport lounges, TV news bulletins, and living rooms around the country as many of our modern scattering return home for Christmas. Many families will tearfully welcome home some of the more than a quarter of a million Irish people who have emigrated in the past few years. At airports, the Government’s new #HometoWork campaign posters will encourage emigrants to “Make your Christmas commute shorter next year”.

This campaign is part of a proposed “conversation” with those abroad about coming home, but many might look at those posters and say that it has felt like a conversation many at home don’t want to hear. For the engagement to be meaningful, it has to go a long way beyond tears and hashtags. We must analyse the emigration of half a million people with the seriousness it deserves, and make concrete changes to address the reasons behind it.

Many of those reasons were direct policy choices. As a nurse told the audience in Dingle, young nurses are leaving because - despite their skills, and the health service’s needs - they are offered so little opportunity at home. Young teachers have left because choices were made to protect the pay and conditions of older teachers, while offering new teachers mostly insecure temporary work. Junior doctors too face unfair conditions and lack of opportunity. Unemployment has fallen but is still high amongst the young. Youth emigration is not an inevitability: it is a response to choices made by government, unions, voters, parents.

The 2008 crash reignited the exodus of rural and western youth. A century of independence has not halted regional decline: Kerry has a smaller population than it did a hundred years ago, as does Mayo, as does Donegal. Tralee, where I grew up, has more than 1,500 people on its housing waiting list.

Many at the conference in Dingle mentioned their outrage that the recent Eir rebrand uses picturesque footage of places where people are still waiting for high speed broadband. While the Wild Atlantic Way has been a welcome success in boosting the vital tourism sector, people in the west do not want their home to be just a tourist destination: they want vibrant communities which give people reasons to stay and build a life. Even if emigrants do come back, many are likely to return to growing Dublin rather than their rural or provincial homes.

Lack of opportunity, regional imbalances, generational inequality: these are complex problems with long histories. Yet so far Ireland’s discussion of how to address contemporary emigration has focused on one single item: income tax rates. The Taoiseach and the Government have repeatedly focused on the issue, and it was raised again in Dingle by Intel’s Eamon Sinnott.

With over 80 per cent of post-crash emigrants under the age of 35, Ireland’s marginal rates on high incomes are a concern for only very few of those who have moved abroad. As UCC Professor Piaras Mac Éinrí said in Dingle, tax was not an issue raised by the thousands of emigrants his Émigré project surveyed.

On a financial level, personal tax pales in comparison to healthcare costs, housing costs, utility costs, and the everyday cost of living. Tax cuts are a political issue at home in Ireland, and emigrants are being used to score domestic political points for an election in which we will have no votes.

Even analysing the emigration decisions of hundreds of thousands of people purely in terms of euros and cents is incredibly simplistic. The decision to move abroad, or to come home, has many reasons behind it, both personal and social. I am the third generation of a Kerry family to spend much of my life living in Britain. But my experience of moving for postgraduate education is worlds away from that of my grandparents, who left as teenagers to work in 1930s England. That is a complex historical story, but too often our discussions of emigration lapse into stereotype, instead of analysing facts and listening to emigrant experiences.

Philip King, the man behind Other Voices, says that his move to Dingle decades ago was inspired by Seán Ó Riordáin’s famous exhortation, “Fill arís ar do chuid” (to return again to our native place). Many of those of us abroad, too, hear its voice nagging at us: “Ní dual do neach a thigh ná a threabh a thréigean”. At home last week I thought about how the word “deoraí” can mean not just exile and wanderer, but also stranger: the thing exiles fear becoming.

Yet moving abroad is not an affliction or a sin: it is, for better and worse, one part of being Irish. Like millions of other Irish people before us, recent emigrants have lives abroad as well as at home: as the filmmaker Dave Tynan said in Dingle, “the Irish nation extends beyond the Irish State”’. Ireland can both make itself a better place to live or return, and integrate its emigrants into a more inclusive national life. We need not be strangers to our own land.

For too long the Irish abroad have been talked about, not talked to. In that 1995 speech, President Robinson quoted Eavan Boland’s line about “The Emigrant Irish”: “we put them out the back - of our houses, of our minds”. Twenty years later there is still some truth to it.

There are other voices to hear from the Irish abroad, and if Ireland is serious about having a real conversation about emigration in 2016, it must listen to them.

Dr Christopher Kissane is a historian at the London School of Economics and Political Science. He participated in a special Generation Emigration panel discussion about what can be done to encourage creative emigrants to move back to Ireland at the Ireland’s Edge conference at Other Voices.