‘My mum is going to Mass every morning to pray Sofia gets home for Christmas ... but our daughter is stateless’ 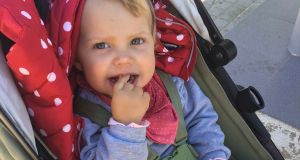 Sinéad Deevy: ‘It’s been 17 months since our daughter was born and we have not been able to bring her home to Ireland from Spain yet.’ 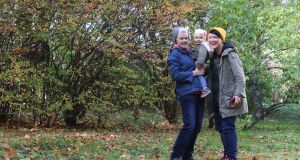 Sinéad Deevy: ‘Seeing Sofia coming into our world and becoming parents after years of trying was everything we could ever have dreamed of as a couple.’

I cried tears of happiness when Sofia was born. I was there for every moment helping my wife Kashka relax through her long labour. Seeing Sofia coming into our world and becoming parents after years of trying was everything we could ever have dreamed of as a couple. She’s our little miracle.

It’s been 17 months since our daughter was born and we have not been able to bring her home to Ireland from Spain yet.

It would mean the world to us to be able to return, but we have not been able to get Irish citizenship for Sofia, who was born in Spain.

We applied for an Irish passport for her, but were refused because under Irish family law, which dates back to 1956, the parents of the child are understood to be either the father or the mother, and the mother is the woman who gives birth to the child. Kashka is Sofia’s birth mother, and is not an Irish citizen, so Sofia is not regarded as an Irish citizen.

Poland has also denied Sofia the right to a citizenship, meaning she is now stateless.

Come May 2020, the Children and Families Relationship Act will recognise some same-sex parents, but not all, in the same way they do with heterosexual couples. So we believe Sofia will then be eligible for a passport through my Irish nationality. We cannot wait until May. We feel abandoned, sad, frustrated and helpless. Some days I feel so annoyed with our Government for the ongoing postponements of the commencement date of the CFRA Act, and other days I’m beside myself with worry about what the immediate future holds for us and for Sofia.

Living in Spain might seem idyllic, but we’re worried about becoming homeless soon. We have to move every couple of months in Spain to new accommodation. We’re really short of money now, which is why we have to keep moving.

We really miss our life back home in Dublin and want to return to work, and finally settle down. We want to get back to a steady income stream, neighbours we know and a daily rhythm for our daughter to grow into. There’s so much about home that we miss.

In Ireland, Sofia would have the opportunity to spend time with her cousins and her granny. Travelling long distances is too difficult for my mum.

I grew up in Cappoquin, Co Waterford in a large family - the doors of our home were always open, folk constantly coming and going, the kettle kept the ESB in business while my mum made rounds of sandwiches and apple tarts. No one was ever turned away, including my 3am disco pals from the 1980s. I watched my brothers and sisters raise their 11 children with a tinge of envy, as I had always wanted kids.

My mum is now 84, so it’s my turn to throw open the front door, flick on the kettle and introduce her to her grandchild - this would be the greatest gift I could ever give her. She is going to Mass every morning to pray that Sofia gets home for Christmas.

Kashka and I met in Dublin in 2008. I soon knew I wanted to spend the rest of my life with her, and having a family was a dream we both shared. Given the age difference she would be the bearer of our children. Kashka spent four years trying to get pregnant through IVF in Poland before travelling to a clinic in Spain. The process was too expensive in Ireland.

Finally, we got the amazing news Kashka was pregnant. In April 2018 we got married in Dublin surrounded by close family and friends. On July 1st , Sofia was born in Spain. It was very important for us to have both our names on Sofia’s birth certificate, something that we were entitled to in Spain but not in Ireland. In Ireland the biological mother currently has to sign all legal documents stating that she is a single mother, even if the couple is married. We could never have done that, it would be a total injustice to our daughter. It’s quite shocking that this is still happening in 2019 in Ireland.

We didn’t know Sofia’s nationality would be such an issue, dealing with three different countries, endless phone calls, applications and long trips to sign more papers. Sofia doesn’t have a passport or photographic ID. This means we can’t drive or fly to Ireland or the UK. If we were stopped by the police anywhere across Europe, we could end up in the police station with nothing to prove that she is our daughter. All we have is her birth certificate, which is not a photographic ID.

Sofia doesn’t have a Spanish passport because a child is not automatically entitled to Spanish citizenship when they are born in Spain. We have applied for Spanish citizenship for her though because both Ireland and Poland refused. Spain may accept her as their own, but it’s not a certainty, and it could take years as we’re not considered a priority.

We dream about raising Sofia in Ireland, taking her to the creche and mixing with toddlers her own age. She has lots of cousins back home and we have lots of friends who also have children, and we want to go back to them and for Sofia to grow up close to family.

All of this is taking its toll on us; the stress, the isolation, the not knowing, the paranoia of what could happen to Sofia not having any photo ID.

We are now campaigning to #GetSofiahome to Ireland for Christmas. We’ve been overwhelmed by the support; our case was even discussed in a Dáil debate. We’re asking the Irish Government to grant Sofia emergency travel documents so we can return to our Dublin lives. We currently have no proof that she is our daughter - it’s simply not right that there is a stateless child waiting for a nationality in any country.

Sofia’s an absolute treasure, full of character, loads of babble and already understands both Polish and English very well, and even a smidgen of Spanish. She loves music, always dancing and bopping to the beat. It would be a dream come true to get our daughter home to Ireland for Christmas.

Separated but living in the same house with our kids: ‘Not a couple, not room-mates’
5