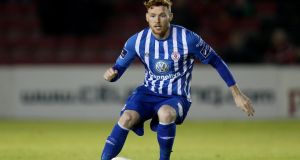 Danny Ledwith: “The job I have here is a bit of a dream job – and I’m able to do it while playing in a professional league environment.” Photograph: Ryan Byrne/Inpho

And so with the words of his father still ringing in his ears, Danny Ledwith returned to the airport last January, fresh from spending Christmas at home and keen to get back to the day job.

Saying goodbye doesn’t get any easier, even if the world is becoming a smaller place, but the Wexford man understands that the decision he made back in 2016 was a necessary one.

Now in New Zealand, working as a football development officer while also experiencing life as a player, he lives within the sanctuary of a comfortable life, away from the adversity of the League of Ireland off-season and its 42-week contracts, and without having to contemplate a career outside football.

“My father knows that opportunities to work in football in Ireland are quite limited at the moment,” explains Ledwith, recalling his father’s words from his Dunedin office. “The job I have here is a bit of a dream job – and I’m able to do it while playing in a professional league environment.

“I work pretty much 40 hours a week as a development officer and then we train four nights a week. It ends up being quite a long day but it is what it is.

“Technically, New Zealand football is an amateur league. For whatever reason they cannot class it as a professional league. But that was mostly the selling point, to be honest. You wouldn’t just be playing; you would have a full-time job, a career to try and kick on as well.”

Uprooting and relocating to the Antipodes, difficult at the best of times, was made easier by travelling with friends. Along with Ledwith, four other players – Eric Molloy, Stephen Last, Conor O’Keefe and Andy Mulligan – made the journey, with Danny Furlong shortly afterwards following suit. Of the six, four are still based at the club.

“The season leading up to when we left, we were all playing with Wexford. We met up at the airport and once we said our goodbyes nobody was in the mood for a chat.

“You are excited but it’s hard to drown out the fact that you’re saying goodbye to your family for a considerable amount of time. As you can imagine, it’s a horrible feeling and it doesn’t get any easier either. I wouldn’t wish it on anyone.”

But after a prolonged bedding-in period, Ledwith has cultivated both a busy and enjoyable life on New Zealand’s South Island.

As for the football? The League of Ireland has its merits, but the New Zealand way is, in Ledwith’s words, “a lot more possession-based”. And this, allied with the lifestyle, suits the 28-year-old.

“Some days we’ll be playing in 30 degrees. Traditionally in Ireland you have some teams that will just make it a really hard day defensively. They’ll be all over you, they’ll be pressing you. You literally cannot afford to do that here. You’d just run out of steam.”

So how does the standard of football compare with what the League of Ireland has to offer?

“I’d be really keen to see how the best team here would fare at Dundalk or Shamrock Rovers. I’d say it would be a really interesting game because there is some top, top quality teams in this league.”

All in all, Ledwith’s additional duties off the pitch or on the sideline, which have become equally as rewarding, means the days of penny-pinching ahead of another season in Ireland have been consigned to the past.

The Southern United Academy, where the Arklow native is a head coach, was established three years ago, taking in young recruits from right across the region. And time is also spent working with local coaches, conducting host sessions and developing the game as a whole.

“The size of our region: it would take about four hours to drive from one side to the other. I think, in our region, there are maybe five Uefa B license holders whereas if you think about Dublin there are probably thousands. That’s what got us in the door.

“But the general lifestyle here is just a lot more suited to me. People are just a lot more relaxed and chilled about things. When this opportunity came up I did a bit of research and looked into the region. It’s the type of thing you wouldn’t get in Ireland without ten years of experience. But you cannot get in to get the experience.”

But with this experience now under his belt, would he return home if the opportunity arose? Does he miss Ireland?