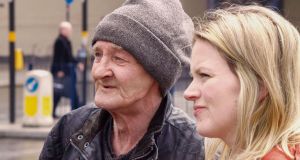 British television’s record when it comes to depictions of Ireland and the Irish is mixed at best. Remember the Valley of the Donkeys instalment of EastEnders? But then Angela Moran, presenter of the first episode of the new season of BBC Four’s A Very British History (Wednesday, 9pm), doesn’t think of herself as British, exactly. She is Birmingham Irish – not quite English, not quite Irish, 100 per cent Brummie.

Moran, a musician whose grandparents emigrated to Birmingham in the 1950s, is an amiable companion throughout this brisk and big-hearted valentine to the Irish community in the UK’s second-biggest city. True, she rather lays on the schmaltz on a visit to her ancestral homeland. The west of Ireland, by her telling, is essentially Tolkien’s bucolic Shire transplanted to the Atlantic seaboard (although a quick check confirms that Hobbiton has more All Irelands than Mayo).

“You’re not going to be stuck in traffic here,” she says as she zooms down a byway in her rented car. Someone should have directed her through Castlebar during rush hour. She is on surer ground reminiscing with Irish migrants in the UK. Frank and Maureen recall coming to Birmingham as children: Frank was 13 and under the impression the family was on a holiday from Dublin. When he learned they were staying he was devastated. Sixty years later he’s still there.

The pub bombings of 1974, in which 21 people died, were ‘shocking. It also brought a degree of shame. Why had it to come to my doorstep before I saw the full evil in it?’

She also presents an English perspective on tensions between Irish people and the diaspora. Moran – one pleasant surprise is her correct pronunciation of her family name – has an issue with the term “plastic Paddy”. As does Paul O’Brien, a Birmingham-Irish musician, who used to tell people he was from Dublin so as to avoid being called out as a fake Irishman.

The shadow over the documentary is naturally that cast by violent republicanism. There is footage of a 1980 Sinn Féin rally through Birmingham at the height of the IRA’s campaign of terror. A British soldier climbs a lamp post and shouts at the passing marchers.

The Birmingham Six survivor Paddy Hill recalled his dismay at the 1974 pub bombings in which 21 died. “I don’t know what changed. Up until ’74 there had always been plenty of warnings” of IRA attacks.

“It was shocking. It also brought a degree of shame,” adds Seamus Collins, who as a naive young person had supported physical-force republicanism through the British-based Clann na hÉireann. “Why had it to come to my doorstep before I saw the full evil in it?”

From eating healthily to staying warm, how to treat coronavirus in the home
Real news has value SUBSCRIBE