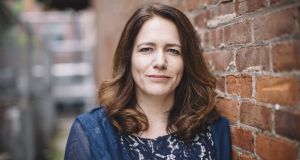 Pauline Turley, originally from Co Down, started interning at the Irish Arts Center in 1997.

This is the longest that Pauline Turley has been away from her New York workplace in a quarter of a century. The pandemic has theatre seats in the Irish Arts Center, where she is vice-chair, temporarily empty. Connecting artists and audiences, however, has never been more important to her.

The centre was founded in 1972 to keep the Irish in America connected to their culture. Now its programme of live performance, visual arts and education includes a who’s who of Irish and Irish-American artists. Actors Gabriel Byrne, Liam Neeson and Roma Downey are among its equally famous benefactors and fans.

Turley started out as a volunteer. “I was doing cheese platters and whatever they needed me to do,” recalls the county Down native.

A drama and theatre graduate of Trinity College, Turley scored a coveted Green Card after her sister put her name in the lottery. “I was cognisant of what a big deal that was. But I kind of came over to prove I wouldn’t like it and then I wouldn’t feel guilty about not making it here.”

Intent on returning to Dublin to complete a Masters, a stint in New York would be research on the city’s theatres. “I took out the phonebook and looked up “Irish”. I started interning at the Irish Arts Center in 1997 and I’ve been there ever since.”

When the centre’s manager went to Dublin to make a film, Turley was left in charge.

“I gave up my lucrative waitressing job at a little dive bar, O’Flaherty’s. That was the thing that was actually paying the bills so that I could afford to work at the theatre,” she recalls.

But her role quickly expanded to a paid one, arranging rehearsals, getting royalties for plays and working with actors and directors. “It was baptism by fire. I was 24 and suddenly in charge of a theatre in New York City. ”

It was right at the start of a golden age for Irish theatre in the city. “In the 1997 and 1998 seasons, we had the Beauty Queen of Leenane, followed by The Lonesome West and The Weir.”

Fundraising became a big part of Turley’s role. When a membership cheque arrived from an “Aidan Quinn” in 1998, a phone call established that it was indeed the Hollywood actor and yes he would like to help out.

“I was desperately trying to raise money and get the place back up and running again,” Turley recalls. “We did a VIP hour and Aidan agreed to show up and brought Shivaun O’Casey as his guest and Steve Buscemi. I’m not sure how much money we raised, but it was more than we had.”

Over time, the centre and its ambitions started to outgrow its lowly 51st Street location and fundraising for a new building began. “For me, it was really an embarrassment – this tenement building, is this how our culture is projected?” says Turley.

“When you go down Park Avenue, there is the Asia Society, which is an entire block, the Alliance Francaise, four massive Jewish museums – we don’t have a building that’s impressive enough to host Seamus Heaney, we don’t have an Irish facility to house the talent that’s coming out.”

Actor Gabriel Byrne, a long time patron got involved, roping in Liam Neeson. “I was able to hold an event every October to raise money, and Liam and Gabriel would come every year and invite their friends to be honoured. We’ve honoured Ralph Fiennes, Daniel Day Lewis, Jimmy Fallon – having the lads’ endorsment was what really helped to turn it around.” Northern Irish actress Roma Downey donated $1million to the new building.

While theatre in Ireland is heavily government subsidised, about 80 per cent of the Irish Arts Center funding is from private fundraising. “Those galas were everything to the organisation. I often say to Liam, just give me that night and you will help me pay artists for the year.”

Delayed by Covid, completion of the new building, over a decade in the pipeline, will happen in the next month or two. The bigger question is when it will open. Most arts organisations are looking at September or October, says Turley.

Virtual events are keeping the connection between the theatre and its artists and audience alive.

“All the artists that we planned to hire in the spring, we tried to turn that around into some sort of piece of work. We are making sure we keep appreciating that artists are struggling right now and what can we do to keep creating work, to keep funding artists in all the ways that we can.”

Some 40 music, language, literature and dance classes a week have pivoted online too. “You used to have to go to Manhattan at a certain day for an hour. Now we have students in 27 states, which we never had. That’s been exciting.”

Turley has peddled hard to stay connected to donors too. “We did some online events like ‘A cup of tea with Gabriel Byrne and Elizabeth McGovern [of Downton Abbey]. We find nice opportunities to bring our giving circle together, to find ways of connecting people who were so used to seeing each other. These are like my family, my top supporters and audience members.”

The pandemic has been hard for Turley. “As an emigrant, you live by [the notion that] ‘I can always jump on a plane …’ To have that taken away was difficult.”

She looks forward to a full theatre again. “The upside of Covid is that people are going to be so hungry for live music and that connection when we get to the other side. That magic of sitting in a quiet theatre with Liam O’Maonlai on the piano, singing in Irish – that is something I deeply, deeply miss.”

She is admiring of the positivity of her adopted country. “People genuinely want to help. It’s ‘how can we make this happen, not all the reasons why it’s not going to work. It’s ‘What do you need and how can I help?’

“There’s no agenda, other than they started somewhere, they managed to get somewhere else, and they want to extend the hand back.”

While its doors are shut, the Irish Arts Center is about more than a physical building. “It’s an opportunity for us to come together, to know ourselves and to connect us. If we don’t tell our story, no one else is going to do it for us. And we’ve got a great story.”