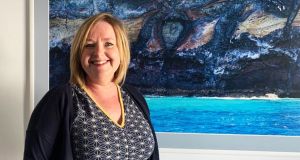 After leaving school in 1989, Sheena McGonigle, from Laytown in Co Meath, went to Dublin to study journalism in Ballyfermot college. As is the case with most students completing their first round of study, a sojourn working abroad followed. In McGonigle’s case, it took her to Jersey, where she worked in the hospitality industry before returning home to study business and industrial relations at the National College of Ireland.

“When I finished up, I got a job with CityJet working in baggage, cargo and administration. I was on their inaugural flight from Dublin to London City with Richard Branson and a number of airline dignitaries. It was the mid-1990s and air traffic was really taking off. It was an exciting time, watching the company grow.”

A move to Belfast soon followed, where she set up a cross-community training organisation called Transition Training.

“The project was aimed at adults returning to work after a lengthy break from employment. We trained loyalists, republicans, refugees . . . a great mix of people. In 2005, we won the World Refugee Day Award with a programme I wrote, which helped people from diverse cultural backgrounds immerse themselves into our culture.”

McGonigle says the company had funding from both the UK government and the EU, “but when funding ended, unfortunately, so did the company”.

By then she had met her husband and, after taking some time out to raise her son, she studied mindfulness and hypnotherapy, which, combined with her training experience, was to become a career direction later on.

“At first, it was very useful when we were fostering children, which we did for three years. It taught me to step back, rather than to try to fix everything.”

When her husband was relocated to Vilnius in Lithuania in 2017, her skills came together symbiotically.

“It’s a beautiful city, which enjoys all four seasons and a great outdoor life. At first, my son wasn’t too keen, but he loves it now. They have a fantastic cafe culture here, a wonderful square where people sit out. There’s cross-country skiing in winter and ziplining and kayaking in summer, so it’s great for kids.”

McGonigle says it reminds her a bit of Ireland in the 1990s, after we came out of the recession-racked 1980s. “Just like we were back then, people here have a new fondness for materialism. Emotionally they aren’t as open, there is a lot of mistrust and the culture is quite macho, but what struck me was how well educated everyone is. They all speak English, Russian and Lithuanian. They are very smart, fantastic people, yet their restrictive attitude born from their past does hold them back.”

So McGonigle decided to connect with international schools to create mindfulness workshops for students.

“It sounds cliched, but it sets out to help students get in touch with their emotions. I wrote a course specifically for kids doing the international baccalaureate (grade 11 and 12) who are on the verge of finishing school and are facing the greatest amount of stress.

“It’s a half-day workshop that I deliver myself. It includes meditation. I also work with the American college, where I deliver a workshop for staff using neurolinguistic programming and cognitive behavioural therapy.”

People have more time for each other here, which is wonderful

McGonigle says that, for anyone thinking of relocating, the job scene is buoyant, though the wages are low.

“Obviously the cost of living is very low,” she says. “Rent for a two-bed is about €600 per month, which is noticeably higher than when I came here. But you can have a meal out for around €10, which makes a nice change from Ireland.

“It’s funny because I knew so little about the place when I moved here and neither did my husband, but we’ve landed on our feet and, bar family and friends back home, we aren’t pining after the green isle.”

McGonigle says there is a small but active Irish community in Vilnius. Some want to be off the grid, but are very sociable and supportive. “That’s the great thing about being Irish abroad. You can tap into an instant network, if such is your want.”

As far as advice for families thinking of moving to Vilnius, McGonigle says they should be aware of the lack of childcare available. “People moving here from the international communities found it very difficult to get childminders. Extended families, including grandparents, aunts and uncles, help out here. It’s very family- and community-driven and people have more time for each other, which is wonderful.”

McGonigle says you can have a great life in Vilnius. It’s a hugely popular destination for Irish people, and she says the flights back home are always packed.

“Luckily the flights are direct and air fares are reasonable if you book in advance. We have a quality of life we couldn’t have in Ireland and are very happy to stay here for the foreseeable future.”