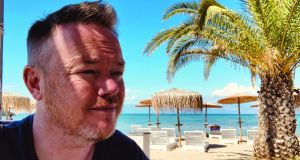 DJ Frankie Beats (Frankie Shanley) is originally from Boyle, Co Roscommon. He lived in the Algarve for two years before he moved to Corfu.

When did you leave Ireland and why?
I left Ireland in early 2017. It was an easier decision than I thought it would be. I couldn’t get a job on any Irish radio station and my demos weren’t even being listened to so I started to focus on opportunities abroad. After years of hard work building my own digital station 1MUSIC.ie, I won two radio awards and I was then offered the dream position on KissFM Portugal.

Did you study and/or work in Ireland?
I grew up in a beautiful little town in north Roscommon called Boyle. It’s a pretty little place next to Lough Key. Pirate radio was my thing back then and I even had the comedian and actor Chris O’Dowd join me a few times on air when we were young. Even though that show was broadcasting to about three people, we felt like we were superstars.

What was it like in Portugal?
I adore my life in Portugal. The people are amazing as is the lifestyle. Thanks to KissFM I’m well known now over there, so I’m always in demand in the clubs and bars and have more friends there than I ever had in Ireland

When did you move to Greece and why Corfu?
I moved to Corfu on July 1st this year It is my spiritual home. Getting here was very stressful because of Covid-19. I had to pass through army checkpoints on arrival in Vienna and then police ones. Passport control was next, followed by a long walk through a thermal camera corridor.

I have been coming here for a few months every year since 2017 for some time out. Through out my life I have battled depression, which people will find strange for someone always happy and bubbly in the public eye. Off microphone I am a very shy person and I prefer my own company, which again people may find strange.

For some reason Greece always made everything feel better. The lifestyle is very relaxed, the people are so calm and welcome you as one of their own. Of course you can’t forget the cats, they are a major part of the island and are everywhere, I find their prescence so relaxing.

What do you do in Corfu?
I am doing my radio show from here and have also been recording special breaking music shows for KissFM Portugal as well as a new dance anthem show for KissFM Australia, which both start airing soon. I also DJ seven nights a week in a club that is on the beach here in Sidari, so I’m keeping busy.

How do you get people up to dance in the middle of a pandemic?
It’s very hard, the whole dynamics of being a DJ have changed. It used to be very easy to get people dancing as they were on holiday so were already in a good mood. People are arriving now after being tested for coronavirus at the airport, which is slightly intimidating.

So far I have not met one Irish person on Corfu. In fact the Irish bars are not even open this year

They are only here for a week and understandably are anxious waiting days for the results to come back. So now I just do my thing as normal and if there are four people there on a changeover flight day, I will perform as if I am performing to 400 people. People say that gives them a bit of normality and eventually they do dance. In saying that, there have been nights when everywhere has been empty.

What is Corfu like at the moment?
Corfu is very strange at the moment. People are here, but not many and there are only 20 per cent of the tourists there would normally be. We only have one hospital and one airport on Corfu, so it is always in the back of people’s minds, what if the island gets locked down, and they are stranded. And when you see so many venues not opening, you know it is from absolute fear or because they have an elderly person living with them and they do not want to take the risk.

Where are the tourists in Corfu from?
So far it’s been English people, Hungarians and Romanians. It isn’t the usual melting pot of nationalities and so far I have not met one Irish person on the whole island, in fact the Irish bars are not even open this year. That is down to people following the advice of Irish Government, so well done to them back home.

How have you found it in Ireland, Portugal and Greece?
I’m now living between Greece and the Algarve in Portugal. One thing I have noticed is that in Portugal and Greece people are very relaxed despite not having much money. When I joined KissFM Portugal in 2017, I regularly got abuse from trolls in Ireland and in fact I left my dream weekday afternoon show over the level of abuse I received. It took me months to decide they were not going to win and I started to return to KissFM with a fresh attitude and a thicker skin. Sadly I have met lots of Irish people abroad working in the music/entertainment industry who have also had to leave Ireland to make it.

Will you stay in Greece?
I will stay in Greece until October and then it is back to Portugal. Sometimes I have to stop and pinch myself. I think about my life and go wow! I lived in the Algarve in Portugal from October to July and then on a Greek island from July to October. I work for one of the coolest radio stations with people who have made me one of their own and I’ve done radio shows live from amazing places . Not bad for a dude from Roscommon.

Is there anything you miss about Ireland at the moment?
I miss the people. For all our flaws, we’re a great nation. Ireland has almost changed beyond recognition in the last few years, but the Irish spirit is still there. I miss my family in Roscommon. During coronavirus the world has realised what is most important in life. I am single now, so being so far away from people I know is very hard during a pandemic. There is optimism coming though now though, which back in March no one would have thought. Who knows, maybe some day in the future I will return to Ireland, but for now it’s sun, sand and face masks!