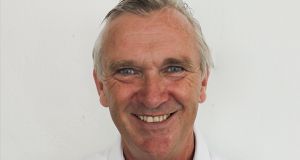 Hugh O’Donnell is founder and chief executive of Bermuda Brokers.

Hugh O’Donnell left Ireland in 1984 a week after turning 20. Having left school at 16, and after a bachelor of commerce (BComm) in UCD, the Gorey native spent three years in London completing his accountancy exams and met his wife there. He landed in Bermuda at 23 and has lived there since.

Over the past 30 years, the Atlantic Ocean island has become a hub of the insurance and reinsurance industries through low taxes, flexible regulation and access to the United States. It has long lured the young and numerate, and O’Donnell was one of them.

“My children were born here. They would consider themselves Bermudian with a strong English connection and a half-assed Irish connection, which drives me mad.”

O’Donnell moved into insurance and reinsurance – when a company he worked for laid everyone off, a generous package spurred him to strike out on his own. He is now founder and chief executive of Bermuda Brokers.

“I persuade reinsurance companies to invest in small businesses so that they can sell insurance,” says O’Donnell. “They don’t invest cash, they give them the ability to take risk, underwriting capacity. They are called an MGA and it’s a very common business model in North America. But my children tell everyone I’m an international assassin because it’s easier.”

Clients are in Europe and Latin America, but mostly in the US. “One of my clients – I am very proud of them – they developed a very good technology for writing homeowners’ insurance. I was able to help them get into business and now they write $200 million a year of homeowners’ premiums.”

He praises the Bermuda Monetary Authority for its willingness to listen to those trying to make business happen.

“The regulatory system here is designed to take the time to meet people so that they can really get the facts before they make a decision as opposed to other places where it feels like it’s one-size-fits-all regulation. That’s just no way to make business happen. If you use a hammer to crack a nut, you don’t end up with anything you can eat.”

He describes the Bermudian business community as “tight-knit, friendly and highly educated”. He says while his effective tax rate is about 20 per cent, the cost of living is extremely expensive. “There are hidden taxes at every level. The cost of living is perhaps more manageable in Ireland, but you have less income in your pocket. Here, you have to earn a great deal to get by.”

“It felt to me like you fell into one of three categories – you had a family business, you had connections so you could get a job or you were leaving. It felt like there was no realistic prospect of a job in Ireland.

“I feel very lucky. I feel life has been good to me, but I didn’t leave Ireland by choice,” says O’Donnell. “Having left, I felt the government at the time lost interest in people like me. There was no sense like there is now of a diaspora. We were nothing but steam being pushed out through a safety valve.”

Ireland gave the young at the time a great education he says, “but then basically forgot us. We left university, didn’t have a job and had to build everything overseas.

“Irish people are very good to each other, and little enough would have needed to be done to be a catalyst in these communities. We’ve all done a lot of connecting with each other overseas, but there was no particular reason this had to be put on our shoulders. We can do it in our 30s, but when we are in our 20s, it’s a lot to ask.

“If I was in government at the time, I’d be saying, do we have a responsibility to these people, what can the Irish embassies in London or New York do to help these people and what’s in it for us. We retain a sense of these people being part of our community.”

Ireland lost much more than it needed to, he says. With those who left, it could have retained more of a connection with some who would then have a much greater sense of obligation to Ireland.

“The IDA comes out to us now and says, ‘How can you help us do that?’ It feels very natural to do that, but why did they wait until five years ago, why weren’t they doing that in the 80s?”

He says “a fair number” of brokers in Bermuda are Irish. “It seems to be something we do rather well. I think the Irish are very good at talking to people. I think we genuinely like people or are interested in them. I think the Irish education system leads them to be good at what they do.”

Bermuda is small. At just 20 square miles with a population of 65,000, it can induce what he calls “rock fever”. The Covid-19 pandemic has seen him confined to the island for almost a year now. Ordinarily, he returns to Ireland to see family regularly. An upside is his children, two at university and one in school in the United Kingdom, are now all back studying from home.

“It’s both a curse and a blessing. They miss university, but it gives them a chance to meet their age group who would otherwise be away at different universities. A lot of kids leave here at 14.”

He describes the Bermudian government’s handling of the virus as “exceptional” with Bermudians having been “sensible”.

“My children are with me. It’s tough on them, but I feel safe. I can meet friends in a restaurant. I can do that because people can’t travel. Everyone is delighted to see you. No one is going anywhere.”