Extraordinary Emigrants: The Galway man was known as ‘quick tempered and tender-hearted’ 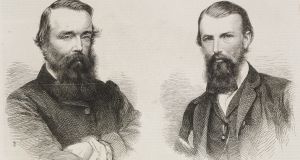 Robert O’Hara Burke (left) and William John Willis, who were first to cross Australia from Melbourne in the south to the Gulf of Carpentaria in the north. They died on their way back as they struggled to reach a rescue party. Images: Getty

One of the most impressive statues in Melbourne commemorates Irishman Robert O’Hara Burke and his second-in-command William John Wills, who attempted to cross Australia from Victoria in the south to the Gulf of Carpentaria in the north in 1860-61. They succeeded in that endeavour but at a great cost, losing their lives on the return journey.

Burke, whose family were Protestant gentry landowners, was born at St Clemens in Co Galway in 1821. At 20-years-old he joined the Imperial Austrian Army from which he resigned seven years later in 1848. He then joined the Royal Irish Constabulary, eventually becoming a member of the mounted police in Dublin in 1850. Three years later he left Ireland, migrating to Melbourne where he joined the newly created Victoria police force. He gained rapid promotion to the rank of inspector in 1856, eventually becoming police superintendent in Castlemaine on the Victorian goldfields in 1858. Wishing for a more active life, he was attracted by the role of an explorer. In 1860 he was appointed by the exploration committee of the Royal Society of Victoria to lead an expedition to explore the inland of the Australian continent and to find a route from south to north.

The expedition team was lavishly equipped with 19 men, 24 camels, several horses and carts, large stocks of food, scientific instruments and even six tons of firewood. When the team assembled in Royal Park on the north side of Melbourne on August 20th, 1860, it was a sensation with crowds of people eager to observe the spectacle. From the start there were problems, with carts getting bogged down even before they had left the park. However, by October the expedition had travelled through Victoria to Menindee on the Darling River. It was there that Burke’s challenging leadership style resulted in the departure of the second-in-command, George Landells, after a series of angry disagreements.

The Australian Dictionary of Biography describes Burke as “impulsive, quick-tempered, arbitrary, generous, tender-hearted and charming, and those who did not quarrel with him loved him.” William John Wills, an Englishman born in Totnes in Devon, became the second-in-command. He was a very different character, a skilled surveyor with a quiet disposition.

At Menindee Burke decided to divide the expedition in order to make faster progress. There was an improvement in pace and the expedition reached Coopers Creek in early summer. Burke was still concerned about speed and so he decided that he, Wills and two others, Charley Gray and John King, would make a dash for the Gulf of Carpentaria in the far north of Australia. Conditions for progress were good, and they reached the shores of the Gulf having travelled about 3,250 km (2,000 miles). Ironically, although they were at the coast they did not see the sea because of the impenetrable mangrove forest.

The return journey was a nightmare in which nearly everything that could go wrong did go wrong. The annual monsoon arrived turning the ground to mud and filling river beds that had been dry on the outward journey to raging torrents. Gray died from exhaustion a few days before the other three explorers arrived back at their camp at Coopers Creek, where they discovered that the rest of the expedition had left a few hours before. Weak and diseased, the three could not catch up, and two months later Burke and Wills died on about June 30th, 1861. John King survived and cared for by a group of Aborigines. He was an Irishman from Moy in Co Tyrone, who was serving as a soldier in India where he was recruited to join the expedition by George Landells, who was in India to purchase camels for the expedition.

Six expeditions searched for the explorers. On the September 15th, 1861 the Victorian exploration party found King and a few days later the remains of Burke and Wills were located and buried. The following year they were disinterred and taken to Melbourne where they were given a state funeral and buried in the Melbourne General Cemetery. The bronze monument in Melbourne was unveiled by the Governor, Sir Charles Darling, on April 21st, 1865.

Despite the disastrous nature of the expedition, Burke and Wills are regarded as Australian heroes. Monuments were erected to them in many locations. There is a memorial to Wills in Totnes, the town in which he was born (and where I grew up). I am unaware of any memorial in Ireland to either Burke or King. A footnote to the story is the success by eagled-eyed people in Beechworth in Victoria, one of the towns in which Burke had served as a policeman, who spotted an item in an auction at Slane Castle in 2014. The community raised funds and successfully bid for a pistol and accessories in a wooden box, which had the inscription “Presented to R O’Hara Burke Esq. Supt of Police”. It is now a prized possession of the Beechworth Museum.

This Extraordinary Emigrants article was written by Dr J. Patrick Greene chief executive and museum director of EPIC The Irish Emigration Museum in Dublin’s Docklands, an interactive museum that tells the story of how the Irish shaped and influenced the world.