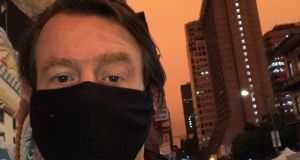 Keith O’Reilly at the Transamerica Pyramid in San Francisco during the wild fires on September 9th, 2020. The skies over the San Francisco Bay Area glowed orange as wildfires raged across California pumping thick smoke into the air. 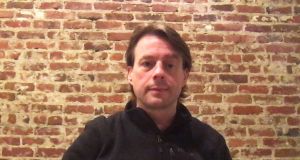 Forest fires, sky high rents and mono culture have given San Francisco a bad name, but Dubliner Keith O’Reilly has made the city at the Golden Gate his home – for the second time.

After completing his Leaving Cert in 1991 and studying marketing at the Technological University Dublin (TU Dublin), O’Reilly decided to join his many Irish friends in San Francisco to work as a DJ.

“In the 1990s, San Francisco was a completely different place than it is now. You’d hear Irish voices all the time and see familiar faces. A lot of the Irish people were working odd jobs and making music or art. It had that west coast vibe, which was on the cusp of something and the energy was incredible.”

O’Reilly says, because not everyone worked in tech, rents were a lot cheaper and you could afford to live in the city and hang out for a while.

Upon returning to Ireland, O’Reilly worked for a digital marketing company called Ring John, before taking a job at SkillPages, a social platform for finding skilled staff in more than 160 countries around the world.

“I was home for over 11 years, but somehow the west coast was calling and I wanted to work with one of the many emerging tech firms there.”

In 2014, O’Reilly moved back to San Francisco to further his career, taking a job at BoxFish, a platform and patented suite of text analytics and AI algorithms engineered to extract hidden entertainment audiences across multiple platforms.

Once the company was dissolved, he went to work for Xoom, a paypal service, as a user acquisition marketing manager before moving to LoanSnap in 2019.

“LoanSnap is a smart loan technology firm that uses AI and machine learning to analyse an applicant’s financial picture, and shows them how to benefit with a smart home loan.

“You just enter your personal details online and then you hear back quickly. It certainly takes the pain out of it getting a mortgage – if you have the money.”

The company currently serves the residents of California, Florida, Illinois, Colorado, and Tennessee and was backed by Richard Branson and ex-NFL quarterback Joe Montana.

In the US consumer credit card debt amounts to over $1 trillion and that high interest rate personal borrowing cost borrowers over $50 billion. “Our loan-borrower matching technology addresses this by addressing the economic market, downturns like the one caused by the pandemic and other financial factors.”

O’Reilly says it’s interesting to work in the area of property in San Francisco, where houses are amongst the most expensive in the world.

“It’s not unusual for people to pay upwards of €10 million for a house. Property prices are high, with the average cost of a property at around €1.5 million. Rents are also famously high. You’re looking at paying around €2,800 to €3,000 per month for a one bedroom apartment in downtown San Francisco. You need a good salary, so there’s no more hanging around.”

As the tech companies have gotten bigger, so has the divide between rich and poor. “There are a few companies like Amazon and Apple who are massive, and others are struggling since Covid-19, like Uber, whatever about the services industry.”

O’Reilly says, since the pandemic, rents have gone down a bit, as renters are choosing to work remotely from neighbouring states, which offer cheaper rents and living costs. “But it’s only fair rents are down, as there are less amenities,” he adds. “All the bars and restaurants are closed inside. You can still sit outside as long as you keep distance. Lots of venues are still closed.

“People here are good at sticking to guidelines and there’s a great outdoor life here, so you can escape to Lake Tahoe, the coast in either direction or the redwood forests.”

But sadly, the city has not just endured the effects of Covid-19, but also the wildfires which are destro ying upwards of 2.5 million acres of forest across California.

“They caused a deep red apocalyptic sky above the city for a whole day. It was totally surreal. When the smoke and ash got so thick, they blocked out the sunlight. It was great we had masks already, to protect our lungs.

“I was out at nine in the morning and the sky was red and people had the lights on inside.”

O’Reilly says, despite the fires, San Francisco is still a desirable place to live. “My wife is from San Francisco. We got married in 2015 and I got my Green Card. I had to jump through many hoops and it wasn’t easy, but now that I have it, it opens up many opportunities.”

O’Reilly says he is in San Francisco for the long haul, but misses regular trips home. “Christmas is looking unlikely, so I’m hoping to come home in February to see my mum.

“We don’t get many days off here. If you get 15 [a year] and a few bank holidays you’re doing well, so you have to pick your days wisely.”

Despite recent events, life in the west coast is still good. “The beauty of San Francisco is the diversity and the laid back energy. It’s still here after all these years.”