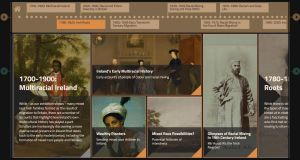 At a time when everyone is talking about the importance of understanding and teaching black history in the wake of the Black Lives Matter movement, it is so exciting to have launched the online exhibition Mixed Race Irish Families in Britain, 1700 to 2000.

It has been a great pleasure to work with Dr Chamion Caballero, director of The Mixed Museum, over the last six months to put this project together. She created The Mixed Museum in the UK to showcase the history of racial mixing in Britain. Many of the narratives resonated with me; I had been working on a heritage project while on the board of the Irish in Britain organisation, as its first African-Irish board member.

The challenge was always going to be how to find records and information going back further into the 18th century, especially during the Covid-19 pandemic. The period 1700 to 2000 is a long period, but if we are to fully understand the social history of the mixed race Irish people in Britain, we need to go back to the colonial and slave trade periods to examine the migration of African and Irish and other people into Britain who formed these mixed race relationships.

Having worked for several years in the Irish community in Britain, I was always puzzled as to why I wasn’t seeing more Irish people of colour in our Irish clubs who looked like me, especially in a diverse society as Britain with a long history of racial mixing. Were they hiding their Irish identity, or are they simply being excluded?

The personal stories and figures that have emerged are astonishing, and give fascinating insights into the lives and racism experienced in the past, as well as the courage of white Irish women who stuck by and stood up for their men of colour, be they African, Asian or Chinese. Many of these women were condemned, and were at times physically attacked for having relationships that crossed racial lines.

I hadn’t expected to discover that mixed race families formed in Ireland and then moved to Britain. It is estimated that between 2,000 and 3,000 Africans lived in Ireland in the 18th century. Who were these people? It would be interesting to know more about them. This aspect of Irish history is very under-researched. Were they British soldiers, servants in Anglo-Irish “big houses”, traders who came off the boat in Cork, enslaved Africans who escaped from ships?

It was important for us to highlight how Ireland’s own often overlooked multiracial history has played a part in producing mixed race families, or people that might otherwise be considered as simply “British”. Similarly, the inclusion of mixed race families that originated in Ireland in the exhibition also highlighted important global currents of migration that included those arriving to Ireland, as well as leaving it.

One of our favourite stories for showcasing these patterns is that of Pablo Paddington, a fascinating account that highlights a globalism and cosmopolitanism in the lives of “ordinary” mixed race families that we are familiar with in the 20th century, but was also shared by many of their 19th century peers.

The circus industry often provided a level of equality and acceptance for people of colour lacking elsewhere in society in the 19th century. Born and raised in Cork, Pablo was often advertised in Ireland to that effect - during his appearances in the city in the 1840s, he was heralded as “the Celebrated Corkonian”.

Prior to touring in Ireland, Paddington had made quite a name in England in the 1820s. Variously described as African, Indian, Brazilian, Siamese and a “man of colour”, Pablo performed incredible acrobatic feats and equestrian displays with a range of circus companies, including the famous Astleys.

A scandalous story emerged in the English press suggesting that “Mr Paddington” was actually a woman who, along with another woman circus performer of colour named Ellen Lowther, had disguised herself as a man. The story, as recounted by Lowther, also detailed how Pablo’s disguise was so excellent that even those closest to her were deceived, including her lover “Miss King”, who broke the relationship off due to Pablo’s numerous affairs with other women.

Intriguing as this aspect of Pablo’s story is, during the course of our research, we discovered it to be a red herring. Nevertheless, the actual account of Pablo’s history is equally as captivating. We discovered that Paddington was not only a man of colour named Joseph Paddington, but was part of a larger and fascinating mixed race Irish family. Pablo’s real identity was hidden, like so many black people.

Pablo’s brother was Father George John Paddington, described widely in records as a black Irish priest and a “native of Cork”, who studied in Rome and went on to receive a doctorate in theology from the University of Heidleberg, the first time a black person had ever received scholastic honours at a European university. Father Paddington was ordained in Haiti by an American bishop, and spent time in New York where he became an acquaintance of the black American Catholic philanthropist, Pierre Toussaint. At the time of his award, Father Paddington was stated in the press to be serving as a Catholic priest in New York, though he actually appears to have been serving in the West Indies, where the brothers’ own heritage seems rooted.

It seems the Paddington brothers were the sons of a white Irish man - also called George Paddington - who travelled to Haiti where he met his black Haitian wife before returning with her to Ireland.

The Paddingtons’ story is reminiscent of other accounts we have uncovered for the exhibition, which show mixed race families traversing countries, continents and conventions. In the late 19th century, newspaper reports in America detailed the accounts of Andrew Tobias and Paddy Murphy, two “Irish Negroes” born and raised in Ireland with proud Irish brogues and identities. The New York Times described Murphy, born in Cork, as being “one of the few Irishmen in New York who could speak perfect Gaelic”, noting that he was soon returning to the place of his birth to take up the inheritance of the house left to him by his white aunt.

The mixed race Irish histories we feature in the exhibition span a range of ethnic and racial mixes outside black and white families, such as the mid-20th century writer Aubrey Menen, born in London to an Indian father from Malabar, and an Englishwoman of Irish descent. Menen’s work - which frequently satirically explored and unpicked the concept of nationalism - was heavily informed by his Indian-Irish ancestry, and his experiences as a man of colour in England and as a foreigner in India.

Menen remarked on the importance of his Irish grandmother on his sense of belonging and identity as a young man. From Killarney, his grandmother had died before he was born, but her ancestry provided him with an anchoring point when he felt caught between two worlds:

These stories above give some insight into our diverse diasporic past. For me personally, as the child of a black South African man and a white Irish woman growing up in Ireland, I had no positive narratives or histories of African and mixed race people. I had no understanding of the history of racism or slavery, and why I endured racism in Ireland or why my mother would have been ostracised by her family and society for having a relationship with a black man in the 1960s.

This AMRI exhibition should go some way to helping us to learn and understand more generally about racism and our mixed race diaspora. We need to bring back to life the stories of black people hidden within the archives. I hope the exhibition will inspire others to continue the research and explore more about black lives and mixed race families from the past, particularly in Ireland and in the US. Education is key to tackling misunderstandings about race, and I hope this free resource will be of use in schools and to the general public.