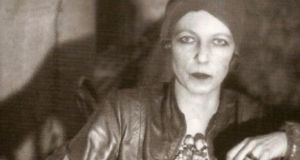 Nancy Cunard was a writer and rebel whose path through the first half of the 20th century brought her through such movements as literary modernism, the fight against racism and the defence of the Spanish Republic during the Spanish Civil War.

Scholars and biographers have studied her in detail through the lens of her many identities - publisher, poet, political campaigner - but less has been written about one particular aspect of her multifaceted identity: her links to her Irish ancestry.

Born in 1896, Nancy Cunard spent her childhood on the Leicestershire estate owned by her wealthy father, Sir Bache Cunard. Here, young Nancy encountered a regular Irish visitor, the novelist George Moore, a man passionately devoted to her Irish-American mother Maud, and whom Nancy termed her “first friend”. A persistent rumour claimed that Moore was Nancy’s actual father, although leading Cunard scholar Jane Marcus noted that there was “much to be said against this notion”.

Nancy would ultimately reject the cossetted world of her upbringing, choosing instead the precarious existence of an activist, author and exile. Her nonconformist personal life - men and women, some of them prominent figures, counted among her many sexual partners - would underpin her final break with her family. Following Maud Cunard’s opposition to her daughters’ relationship with the black jazz musician Henry Crowder, Nancy published a 1931 pamphlet denouncing the racism of her mother’s social world.

In 1928, Nancy Cunard established her publishing house, the Hours Press, in Paris. In the French capital, Cunard discovered a young writer whom she described as being “enchantingly Irish” with something “of the fierce austerity of a Mexican eagle” in his sharp facial features: Samuel Beckett. James Joyce was their mutual friend. Given his failing eyesight, Joyce relied on friends to provide research for his writing, and Cunard recalled how Joyce would send Beckett in search of “all kinds of strange data” including a lengthy list of rivers. In 1930, Cunard published Beckett’s first standalone publication, Whoroscope, a long poem about Renee Descartes contemplating an egg.

Anne Donlon has warned against reducing people like Cunard, who functioned as vital nodes in wider cultural and political networks, to a footnote in the lives of their more celebrated counterparts. Cunard’s relationship with Beckett demonstrates how she was more than simply the means to his publishing ends. His talents served her political ends in turn. In 1934, she enlisted Beckett to translate essays for her landmark work, the Negro Anthology. After censors rejected one of the Beckett-translated essays ahead of publication, Cunard secretly inserted the pages herself while assembling the book. This anti-racist anthology comprises, in Anna Girling’s words, “one of the most comprehensive pre-Civil Rights era documents of transatlantic black history and culture”.

Three years later, Cunard solicited a contribution from Beckett for her pamphlet Authors Take Sides on the Spanish Civil War. Beckett took a side with the famously succinct response:

“¡ UPTHEREPUBLIC !” The defence of Spain’s leftist government was the central mobilising issue for Cunard in the late 1930s. Her unapologetically partisan journalism on the conflict found many outlets, including one Irish leftist newspaper, The Irish Democrat, which printed her report from a Paris exhibition of Spanish Republican art in a September 1937 issue.

Cunard’s engagement with Irish culture through figures such as Samuel Beckett and George Moore is well documented, yet the story of her Irish ancestry is more difficult to untangle. Her mother Maud Cunard was born Maud Alice Burke to an Irish-American father and a mother of French descent in San Francisco. Rumours suggested that Maud’s actual father was William S. O’Brien, a Laois-born businessman who became extravagantly wealthy during the Gold Rush.

Then there is the question of Nancy Cunard’s Irish rebel ancestry. Several biographers have suggested she was descended from Robert Emmett through her mother’s Irish-American family. In fact, Nancy’s link to the revolutionary executed for his role in leading the 1803 Irish rebellion comes from the family of her father, Sir Bache Cunard. Nancy was a direct descendant of Thomas Addis Emmet through the Cunard line, making her verifiably the great-great grandniece of Robert Emmet.

Although Nancy Cunard’s home in France was ransacked during the Nazi occupation, a book about the life of Robert Emmet survives among the remnants of her personal library, now held in the Harry Ransom Centre in Austin, Texas. One of her Irish friends, the Fermanagh-born writer Charles Duff, remembered the “great pride” Cunard demonstrated when speaking of her insurrectionary Irish ancestry.

In an essay on the “enigma” of Cunard’s personality written after her death in 1965, Duff wrote that her determination to avoid becoming an “accepted person in the upper crust of any society” was one source of her extraordinariness. Yet, he continued, “something more has to be added to it”. He noted that Cunard’s Irish ancestry was the only explanation she ever provided to him for her idiosyncratic personality. In her Irish family history, Cunard could find a recognisable trait: the willingness to sacrifice everything in the service of a cause.

This Extraordinary Emigrants article was written by Dr Maurice J. Casey, DFAT historian-in-residence at EPIC The Irish Emigration Museum in Dublin’s Docklands, an interactive museum that tells the story of how the Irish shaped and influenced the world.

Back to school: We went into a tailspin when our eldest had a temperature
Real news has value SUBSCRIBE