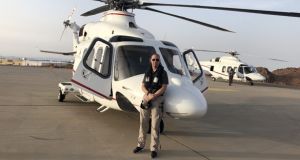 I first left as a 20 year-old. I was in the Irish Army and went to serve in Lebanon with the UN. That tour in 1996 showed me that I really wanted to see the world. I started to fly helicopters in 1999 and spent a year in Ireland before joining a helicopter company in the North Sea and moving to Aberdeen.

The industry is dominated by men. Each and every female pilot has gone through a very unforgiving system

I left Aberdeen in 2007 and spent a year at the height of the Celtic Tiger flying the extremely wealthy around Ireland, however as we all know that didn’t last long. I then went to work in Spain before moving to Qatar in 2009 where I met my wife Captain Safia Hosein. Being married to someone who does the same job helps to make a complicated life easier. We both understand the pressures and difficulties of our industry and the stresses involved in being an aircraft commander.

I went to Blackrock College in Dublin, but by fifth year I knew I didn’t want to continue to third-level. I left school after my Leaving Cert and joined the Irish Army. I didn’t join as an officer since I knew I wasn’t joining for a full career. I joined as a regular soldier and grew up fast, serving all over Ireland, on the Border and in Lebanon. I learned to fly as a civilian pilot after I left the Army. In aviation you never stop studying and you are tested rigorously every six months. I have held licences from the US, Europe, Qatar, Malaysia, Bermuda and UAE and have been qualified on more than 14 types of helicopters.

Tell us about your work

I started as an instructor but have now flown for photography, power line patrol, survey work, tours, oil and gas exploration, search and rescue and VIP operations. The last decade I have been mainly flying the Leonardo AW139, the same type of helicopter the Irish Air Corps use. I spent most of the past 10 years working as a VVIP helicopter pilot for very, very important people, but due to non-disclosure agreements I can’t go into the specifics of my last job. I have been fortunate enough to fly all over the world and my passengers have been heads of state, royalty, rock stars and everything in between.

In my VVIP role I was on call every day. So much like in the Irish Army, each day was very different. I woke early and trained. Keeping fit is important in to maintain your pilot’s medical certificates.

At any time of the day or night you could get the time and location of your passenger. Over the decade I woke on many days in one country and went to bed in another. I have walked away from my supermarket shopping trolley to run to the car and go to work. I always had my uniform and flight kit with me. I have walked away from dinner, massages and anniversaries. I was extremely lucky that my wife Safia is also a VVIP pilot and so we both understood that it was not personal and just the nature of the job.

Are there many women in your industry?

Safia is from Trinidad and Tobago. They have a large oil sector which requires the use of helicopters. There are not many women in helicopter aviation and she was the first female VVIP helicopter pilot in our last job. The industry is dominated by men. Each and every female pilot has gone through a very unforgiving system. It hard on anyone who is different, therefore women have to work extremely hard and be extremely good in order to succeed or simply progress. This is changing, however the process is too slow.

What work do you do in Barbados?

We left our jobs in UAE at the end of 2019. We were planning to spend a few months with my wife’s family in Barbados before moving on. However, like all good plans, they didn’t survive first contact with the enemy. The enemy? Well this time it was Covid-19. Suddenly all the jobs we had been offered were no longer available. The aviation sector has been hit hard and many friends and colleagues are furloughed or unemployed. The job I was offered has been delayed, so I hope to return to Europe in November to take up a role in helicopter emergency medical service pilot.

During Covid-19 I informed Ireland’s Department of Foreign Affairs of my location and got a call the next day. It really made me feel my country cared

Barbados is such a beautiful place to spend any time. Growing up in Ireland in the 1980s and 1990s, hearing someone had gone to Barbados on holiday was shorthand for them being very wealthy. I could have never guessed that I would ever visit, let alone spend almost a year living here. I swim each day at the beach, free diving or scuba diving. It is a small island, but there are caves to discover, wrecks to dive and reefs to explore. For a tiny rock, there is a lot to see

Has Covid-19 changed things there?

We were extremely fortunate to be in Barbados for the pandemic. The country has a population of about 287,000 people. Since Covid-19 hit there have only been 189 confirmed cases of whom seven people lost their lives. Barbados had its first recorded cases on March 17th and by March 26th there were 24 cases and prime minister Mia Mottley had declared a national emergency and curfew from 8pm until 6am. You still cannot go into any store or on transport without a mask, hand sanitiser is at the door of each store along with temperature checks.

I have always informed the Irish State as I moved throughout the world since many locations were high risk. The embassies have always been fantastic to me. During Covid-19 I informed Ireland’s Department of Foreign Affairs of my location on the app and got a call the next day from a lovely person asking if I needed anything. It really made me feel that my country cared.

Does being Irish count there at the moment?

Barbados is often described as “little England”. This is undeniably true and many of the non-Bajans you meet are British. Having said that, there is a long history of Irish people on the Island. When you first visit you notice that the accent is quite sing-song, a little like the Cork accent. In my career and travels, being Irish has always been a massive advantage. I have lived and worked in the US, UK, most of Europe, Pakistan, Kazakhstan, Turkmenistan, Seychelles, Saudi Arabia and all over Africa and being Irish means you are warmly welcomed. It has calmed tempers at borders and airports when I have presented my Irish passport.

Most of all I miss my family and friends. I am very lucky to live in a time where I can communicate with so many people so easily online. Having travelled a lot, I am well-practiced at taking all the things I miss which can be carried. So usually I depart with a bag full of Tayto (Safia loves Tayto), McCambridge’s soda bread, Cadbury’s chocolate and a few more home treats. As for all those things you cannot carry, I miss the smell when hiking in the Wicklow hills in the rain, I miss walking the prom in Galway and jumping off the Salthill Blackrock diving.

Do you stay connected to Ireland?

I have a son from a previous marriage who lives in Ireland. I haven’t been able to see him in person since Covid-19 started. I am just thankful that Barbados has very fast broadband and I can speak to him and see his face. We had thought about moving to Ireland, but the process for a foreign spouse is not the most straightforward.

If you work overseas and would like to share your experience with Irish Times Abroad, email abroad@irishtimes.com with a little information about you and what you do

Yotam Ottolenghi: it shouldn’t take a pandemic to make us realise that it’s the simple things in life that matter
5