Eoin Keith (51) crosses finish line after 36 hours and ahead of 2,000 competitors 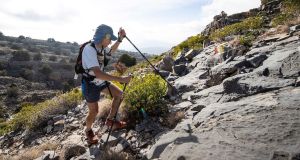 Eoin Keith (51) from Dublin crossed the finished line after 36 hours, 4 minutes and 29 seconds. An Irish man has won a two-day, 170km race through the Al Hajar mountain range in Oman

An Irish man has won a two-day, 170km race through the Al Hajar mountain range in Oman.

Eoin Keith (51) from Dublin crossed the finished line of the OMAN by UTMB race after 36 hours, 4 minutes and 29 seconds.

The trail included two steep ascents including Jebel Akhdar, known as the Green Mountain, and 3,000m high Jebel Shams, one of the highest points on the Arabian peninsula.

After his win, Mr Keith said: “It was so technical, possibly the most technical race I’ve ever done.

There was a long 1,000m descent which you normally would expect to make tons of time on but we were so slow.

“It makes it easier to keep going mentally because it’s so technical that you need to concentrate pretty much the entire time.

“ There’s no real let up mentally and it was intense racing all the way. But very enjoyable, Oman is a gorgeous country and the mountains are truly spectacular.”