‘In the US, no one cares that I’m only 27 or what school I attended’ 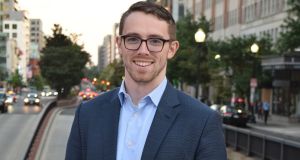 When Shane McCarthy moved to Boston in 2014 with a degree in business information systems under his belt, he couldn’t possibly imagine he’d end up at the inaugural presidential ball in Washington just three years later.

“I worked as a software engineer for six months at a company called Agencyport until my boss decided to leave and start a military social media platform (app and website) called Sandboxx with a high-ranking Marine Corps general. I was their first hire as chief marketing officer.”

Since then, the company has grown to over a million users, 50 team members and an annual turnover of €10 million.

Sandboxx works on various levels. It features blogs containing heartfelt articles about what it’s like for a parent to join the army, what the best army jobs are, a packing list for bootcamp, as well as the pros and cons of dating a marine and more.

“You can write a message on the app, add a photo and hit send. Our team prints and delivers these letters the next day to over 100,000 members of the military who have no access to technology due to training or deployments overseas.”

“Seventy per cent of all those joining the US military and their families sign up to Sandboxx to stay in touch via letters, blogs or to view our training content,” says McCarthy, whose work on the rapidly growing technology company has since been covered by Forbes, TechCrunch, Fox News and the Washington Post among others.

“I run all marketing, growth, advertising sales and government sales,” says McCarthy, who holds an O-1 visa for individuals with extraordinary talent. “We have multiple contracts with department of defence programmes. Most of my work revolves at the apex of digital marketing and outbound sales, requiring relationship building at the highest levels of the US military and public service.”

McCarthy says his work days are varied and interesting. “I get to travel to military bases around the US, which has been a great way to see parts of the country that I would never have planned to visit. I was in Orlando and San Diego over the two weeks recently for meetings, and then I spent a weekend in Oklahoma to present an award for the army. The variability is enjoyable and keeps the role fresh.”

McCarthy says working in the US is no walk in the park, but no one cares about where you’re from, only what you can do. “They really appreciate the hard work here and it is very much a meritocracy. No one cares that I’m only 27 or what school I did or didn’t attend. I don’t think anyone has even asked me what I studied in university. “

McCarthy, who is now living in Washington DC with his Irish wife, says the city’s strong links with Ireland work in his favour. “There is a strong Irish and Irish American network here. The Irish Ambassador to the US had the family of the late Seamus Heaney at a reception recently to celebrate Heaney’s work. The event was packed with both Irish expats and Americans.”

McCarthy also didn’t just get a front-row seat in the 2016 election, he also attended the president’s inaugural ball and has had the opportunity to visit the White House on a couple of occasions with military groups.

But he says, there have been slight barriers with his “strong Kerry accent”. “When presenting to high-level military officers, including generals, I was conscious of speaking too quickly with my Kerry accent. I have trained myself to slow down since. The accent is always a good conversation starter.”

Like many Irish people who came before him, McCarthy has maintained strong connections with his home. “I sit on the US board of the Cork-based Hope Foundation charity, which provides healthcare and other services to 2.7 million of the poorest people in India.”

“I had founded the Hope Foundation Society while in UCC to support their work on campus and have stayed involved since. I also sit on the board of Irish company Carefolk. Carefolk is an Enterprise Ireland-backed, award-winning caregiving and healthcare platform. “

In terms of advice to people wanting to live and work in the US, McCarthy suggests joining a fast-growing company and just going for it.

“Work abroad for at least a year after graduating. Make use of the J1 graduate visa in order to experience the US. You will be more employable upon returning or you may find a fantastic opportunity stateside to accelerate your career in a way that is rarely available back home.”

Like most Irish abroad, the one thing McCarthy misses is the “craic and banter” back home. But the massive opportunities he has enjoyed far outweigh any downsides of being away from home. That said, he’ll be trying, as always, to make it home for an Irish Christmas.