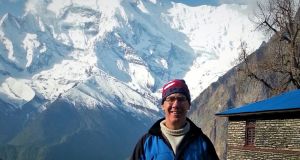 Niall Kavanagh created a new life for himself in Nepal

One of just a handful of Irish people living permanently in Nepal, Niall Kavanagh created a new life for himself at the foothills of the greatest mountain range in the world.

Born in Templeogue, Kavanagh left school in 1978 to complete a mechanical engineering apprenticeship in Bolton Street. “I got a job with a water pump company in Dublin before taking on various positions as a welder.”

After branching out into marketing, he worked for the American multinational 3M in Dún Laoghaire as a territory manager, operating in the fields of industry, worker safety, health care and consumer goods.

“I was there from 1990 to 2007. After 17 years being geographically bound, I wanted to do something different.” At first, he wanted to be a photographer and did some freelancing, but money wasn’t regular so Kavanagh decided to study pharma technology at IT Tallaght with the view of working in manufacturing.

“Sadly, the work in manufacturing plants in Ireland was pretty thin on the ground and so, after completing my studies in 2013, I decided to do something different altogether and move to Nepal.”

Kavanagh got the idea after his son had volunteered for the Irish NGO, The Umbrella Foundation, in Kathmandu. “I just thought it sounded exciting and different. After contemplating my options in Ireland, I concluded I had nothing to lose and got on a plane.

“When I landed, there was a blackout in the city and I was sitting in the back of a taxi driving through the darkness to a hotel, wondering if I had made a massive mistake.”

But upon meeting volunteers at the charity, which works to alleviate the impact of trafficking, poverty and war on children and their families in Nepal, Kavanagh realised he made the right choice.

“The charity was established in 2005 in response to the growing number of illegal “orphanages” neglecting children’s most basic rights – food, education, safe shelter, healthcare. It’s a great charity.”

But rather than volunteer on a daily basis, which he thought should be left to younger volunteers, Kavanagh decided – after a conversation with a local expert – to work on an earthquake preparedness plan.

'It came with such a velocity and strength, we were knocked to the ground'

“Based on past records, we surmised that there was a big earthquake on the way. So I recruited assistance from the Nepalese army, who had been to Haiti and seen the damage there. We checked all of our accommodation and found that the volunteers’ house wasn’t safe. So, within a few months, we moved everyone out to more suitable accommodation.”

On April 25th, 2015, during a visit to a farmer’s market, Kavanagh had to put his plan into action. The earthquake known as the Gorkha earthquake, ripped through Nepal hitting 7.8 on the Richter scale. “It came with such a velocity and strength, we were knocked to the ground. About 9,000 people were killed, many thousands more were injured, and more than 600,000 structures in Kathmandu and other nearby towns were either damaged or destroyed.”

It even caused a massive avalanche onto base camp on Mt Everest, which is 200km from Kathmandu.

Kavanagh, whose two grown-up children live in Australia, was on the missing list for several days because he was tending to injured people and making sure the children and volunteers were safe. “It was also difficult to get a message out, especially as there were over 400 aftershocks in the days after the quake. The one on May 12th killed another 200 people.”

In the aftermath of the destruction, Kavanagh volunteered on numerous rebuilding projects. “I also worked on art projects, bottle collections, a battery disposal awareness program and the Eco-Soap Bank, which is an environmental non-profit working to save, sanitise, and supply recycled hotel soap for the developing world.

“The message from the initiative is to generate awareness for hygiene, which has been paramount during the recent Covid-19 crisis.”

Kavanagh says cases in Nepal have been kept down via a strict lockdown since March this year. “We’ve had 50,000 cases and 300 deaths. We’ve fared better than Ireland, despite not having the ICU beds or the staff. But we don’t have care homes here, as the elderly live with their families.”

'It’s difficult to work here, as Nepalese get preference, which is fair enough'

“I fear that once people start returning to their villages, this precarious situation could change.”

Kavanagh says that, despite restrictions, there have been benefits to the virus. “The skies above Kathmandu are clearer than I can remember. If you climb the mountains above, you can see Mt Everest in the distance for the first time in decades.

“This year the mountains weren’t climbed, which for them is a good thing, but bad for the economy.”

Though he doesn’t come across many Irish ex-pats, Kavanagh says he regularly meets Irish mountaineers like Pat Falvey and Noel Hanna when they come to climb. “Sadly last year, we lost Seamus Lawless on the balcony after summiting Mt Everest, even though he was really strong on the day. It’s was just bad luck by the sounds of things.”

Kavanagh has a visa to live in Nepal since getting married to his Nepalese wife. “But it’s difficult to work here, as Nepalese get preference, which is fair enough. I essentially just volunteer and live off my pension. It’s very cheap over here. We rent a two-bed apartment for €175 per month. You wouldn’t get that in Dublin.”

Currently, he is working with the Nepal Ireland Society and assisting the newly formed Ireland Nepal Chamber of Commerce. “It’s an interesting life here, but the biggest issue is population, a lot of which comes from India. Very often it’s 800 percent higher than the recommended limit.”

“Looking to the future, if we can keep the virus at bay while having cleaner air, that would be perfect.”