Working Abroad Q&A: 'I didn't want to wake up at 65 and think is this all you have done with your life?' 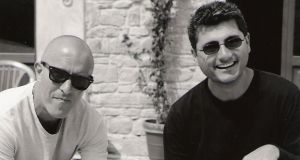 Patrick Houlihan (left) is originally from Tralee, Co Kerry, but now lives in Cupramontana, Le Marche, Italy where he runs a B&B with his partner Enzo Fazio

I joined AIB directly from school in 1979 and worked at branches in Co Cork until early 1988. Then, I moved to London with AIB and worked in various branches until my resignation from the bank in 2004.

How did a man from Kerry end up running a B&B in Italy?

I met my Italian partner, Enzo, in London in 1996. Around 2000, we both became disillusioned with life in London - we had good jobs with decent salaries, two flats, six weeks holiday a year, but we were not happy. Life consisted of getting up at 6am, travelling to work, working all day and returning home late each evening. Also, I didn't want to wake up at 65 years of age and think “Is this all you have done with your life” (ie work for AIB for 45 years), retire and see out my days in regret.

So we started planning to move to Italy. We initially had the idea of running an English school before settling on buying a property and running a B&B (at least we would then own a house). We explored Tuscany and Umbria, but found that we could not afford property there. At that time Le Marche, on the Adriatic coast, was being spoken of as “the next Tuscany”, so we visited in late 2003, saw lots of properties, fell in love with Mulino Barchio and decided to buy it and move to Italy in 2004.

I have to admit that the whole thing was a little crazy and the quick decision reflected our desire to escape the rat race as soon as possible. Our friends and family thought we were “very brave” (what they meant was totally crazy) and none of them had ever heard of Le Marche. Tuscany, Umbria, Amalfi coast and the lakes, yes. Le Marche, no. Also, the house needed to be completely restored.  The structure was sound, but we had never before restored anything, certainly not a 200-year-old former water mill. And as for running a B&B, our friends thought it would be like Fawlty Towers, only less well managed by less friendly hosts.

Anyway, on July 5th, 2004 we flew from Heathrow, accompanied by Garp (our beloved cat, RIP) to start our new life in Italy. The restoration started in August and was completed the following March. We moved in and started the business in the summer of 2005 with four en-suite double bedrooms.

Would you restore another property in Italy?

Perhaps, but not in six months as a normal timescale would be about two years. Luckily we were here to supervise, particularly the budget, as costs can often exceed initial estimates, especially with an old building.

What does your day-to-day work running your B&B involve?

One of the main reasons for moving to Italy was to enjoy life in a beautiful country while earning enough money to be able to sustain that life. So we do not open the whole year round and close for the winter months. We do everything ourselves from cleaning the rooms and bathrooms, doing laundry and ironing, making breakfast and looking after the sizeable garden and grounds. There is also a vineyard of about one hectare and 8 hectares (20 acres) of farmland, both are rented out to a winemaker and farmer respectively.

There is no such thing as a typical day as every guest and every day is different. We serve a continental breakfast and we make our own breads, scones (Italians love my scones), cakes, marmalades and jams. The majority of our guests are Italian (about 50 per cent) and the rest are from Europe (Dutch, Belgian, German, English - and even a few Irish), the US, Canada and Australia. Repeat business and recommendations would account for about 40 per cent of bookings. Word of mouth is the best advertising there is.

The Le Marche region is known as “Italy in one region” in that it has mountains, rolling hills, beautiful hilltop towns and the sea - the Adriatic coast is stunning. It is as beautiful as Tuscany, much less touristy, with costs a fraction of its neighbour. Cupramontana is a typical hilltop town of about 5,000 people.

Italians love Ireland and the Irish. They cannot understand how anyone would leave Ireland. I mention two words in particular - the weather!

Farming and, in particular, winemaking are the main industries. The local famous white wine is Verdicchio, with excellent reds such as Rosso Conero and Lacrima di Moro d’Alba produced near the coast. Life is at a slower pace and the tourists who come here love it as it is less crowded than other places. And yet, Rome is three hours away, Assisi one hour, and Venice and Milan four to five hours by rail or car.

Italians love Ireland and the Irish. They cannot understand how anyone would leave Ireland. I mention two words in particular - the weather.

The cost of living here is about one-third of that in Ireland (or so my brother tells me when he visits from Dublin). Then again, salaries are much lower here. A pizza is from €5, a litre of decent table wine from € 1.60, a bottle from €6. One can eat well from €20 a head.

My mother loved it here and used to visit here regularly, but she passed away three years ago so there is little in Kerry for me. I do still miss a lovely pint of Guinness with friends in Jess McCarthy’s pub in Tralee on a cold evening with the fire on in the grate.