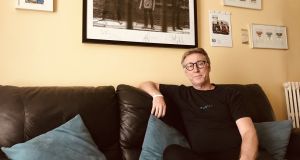 Paul Lynch from Ballybough in Dublin moved to France in 1994 where he works for Eurocontrol.

From the shadows of Croke Park to Paris, Paul Lynch combines a career in aviation with supporting and strengthening the Irish community in France.

Originally from Ballybough in Dublin, Lynch started working for Aer Lingus in 1979, aged 15. “I worked as a messenger and got to deliver mail around the airport. It was very small at the time. There was just one terminal, but we were at the cusp of the golden age of aviation and it was exciting.”

At the time, there was an option for young airport staff to do their Leaving Cert at night and then move into clerical rather than operative work. “So after compilation of my exams, I segued into revenue accounts.”

Lynch followed up his qualifications with an airport dispatch diploma, which was certified at Bolton Street.

“After 15 years at the airport, I heard that the European Organisation for the Safety of Air Navigation, also known as Eurocontrol, was looking for flight planners and I threw my hat in the ring.”

Eurocontrol is a pan-European, civil-military organisation which supports European aviation via air traffic management and flight planning. “Much to my surprise, I got the position and decided to move to France to work as flight planner in air-traffic control flow management in their Paris offices.”

On landing in the city on the Seine in 1994, Lynch decided to join a GAA club in order to meet with fellow Irish folk.

“Obviously it was pre social media and online groups, so I joined the Paris GAA club, which was the first ever European GAA club. We even played in Dublin in 1998.”

Lynch made many Irish connections in Paris’s most famous Irish pub Flann O’Briens. “It was the only bar that showed live GAA matches and it used to be packed for the All-Ireland finals.”

But it was also to be a launch pad for future fundraising campaigns.

“One night we decided to do a fundraiser for the victims of the Omagh bombings. We had a street race and raised over €3,000 between just a handful of us. After that I wanted to be more proactive.”

“I organised the fundraising balls annually until 2016. They were amazing. I had the support of lots of Irish dignitaries in Paris and was honoured at a speech for my work by Paul Kavanagh, the previous Irish ambassador to France during a visit from President Michael D Higgins. He said I raised hundreds of thousands for humanitarian causes, which was nice.”

We organised an official St Patrick’s Day parade in 2018

In 2016, during the European Championship, which took place in France, Lynch was invited to a Ireland soccer training session in Versailles, which was to set off another venture.

“There were lots of Irish people at the event from various business associations and GAA clubs, people I hadn’t seen in years.”

“Obviously when I first landed in Paris, I’d meet Irish people but we drifted apart and communication ended, So, I decided to set up the Irish in France in 2017.”

Lynch says the association receives funding from the Emigrant Support Programme administered by the Department of Foreign Affairs and is strongly supported by the Irish Embassy in Paris.

“We organised an official St Patrick’s Day parade in 2018. My board members and I have also held numerous meetups and events around Irish culture. 2020 was set to be a big year with sports days, summer balls, Christmas parties for kids and adults.”

But like everything else, Covid-19 threw a spanner in the works and Lynch has had to adapt his non-profit work. “Everything is online now and we’re working hard to get some interesting programmes going, but it’s obviously very different.

“My daily job also saw the effects of Covid-19. The number of civilian flights above Europe has fallen since March, especially in the first weeks of pan-European lockdown, but I also work on validation and acceptance of other aircraft which include cargo and military flights.”

Lynch says Eurocontrol’s website shows how many flights are flying above Europe at any given time with a live graphic. Numbers of flights have increased recently but, according to the organisation’s website still amount to only about 45 per cent of 2019 traffic.

Having bought an apartment in the Bastille area of Paris 20 years ago, Lynch is settled.

“I speak French, but communicate in English at work and often with friends too. I’m not forced to speak French on a daily basis, so it could be better, but I can communicate well with the Parisians.”

Like everywhere else, he says, France has seen numerous restrictions return in order to cope with the more recent pandemic surge.

“You have to wear masks indoors and on some streets too. When you go to a restaurant, you wear one until you sit down and then when you go to the bar or the toilets, you put it on again.

“But life in Paris is still going on. French people are pretty relaxed. They don’t pander to scaremongering or hysteria.”

People in France are pretty happy with the response, despite the high rate of infection, he says. “We have great healthcare here. You pay a lot into it, but you get something back.”

“The rates of infection are scary but, fingers crossed, the wave this time round isn’t as strong as the first one,” he adds.

“I’ve been here a very long time and find Paris to be an amazing and resilient city. It’s visually stunning and there’s always something to do here. The energy and the history and culture is addictive. I may move home in the far distant future, but certainly not anytime soon.”