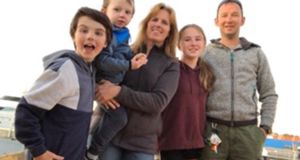 Debbie Teahan is a swimming coach in Perth, Australia. She is married to Sean (right) and they have a daughter Erin, 12, and two sons, Daniel, nine, and James, two

Debbie Teahan is a swimming coach in Perth, Australia. She is married to Sean and they have a daughter Erin, 12 and two sons, Daniel, nine and James, two. James was named after Sean’s father, who died three years ago. She uses Facebook and is still Debbie Cashman there, so that is how people know her

We left Ireland in June 2011. In March 2011 we started to get into trouble with our mortgage and asked the bank for help. Their advice was to move out, rent out our house and come up with the shortfall. We told them we had nowhere to move in to - Sean’s parents were in their 80s, my father was a widow and we had a three year-old and a screaming three month-old baby at the time.

We had Australian passports from living in Sydney in our 20s and we knew we had to go there if we had any hope of starting again. So with two backpacks and two kids we headed for a city we’d never been to. We didn’t know a soul, but knew we had to put the head down and make it work.

I’m a qualified swimming, fitness and sports instructor and have been working in the fitness industry since I was 17, when I worked as a lifeguard. Watching the way you could help a terrified person with such an important life skill inspired me to become a swim teacher. I work for the Australian department of education teaching swimming to primary-school children. It is a great job, especially over here with the heat. I worked outdoors, so being in work felt like being on holidays. But even with all the covering up, my pasty skin couldn’t take long-term exposure, so I work indoors now. I still feel very spoiled having access to so many 50-metre pools and amazing facilities here. For a sporty person, this place is next door to heaven.

Some children come in wearing their underwear, as they’ve never seen a swim suit let alone owned one

My goal is to teach adult classes again though, as every second Irish adult I speak to admits they can’t swim as soon as they hear about my job. I’ve also worked with refugees and in depressed socio-economic areas where the children wouldn’t experience learning to swim only for special programs. This is most rewarding work. Some children come in wearing their underwear, as they’ve never seen a swim suit let alone owned one. Children from really dry countries, where clean drinking water is a luxury, think I’m mad when I act silly and splash water about. Some of them try to drink it as they can’t understand that the water has been treated.

Our own three children are benefitting from these programs too. My daughter Erin, who is 12, swims in high school every week and is now is doing junior lifeguard activities such as rescues and Cardio Pulmonary Resuscitation (CPR). As a parent, it helps knowing that if she goes to a friend’s house with a pool, I know she will be safe as she understands the dangers, as well as being a very competent swimmer. Of course the beach lifestyle is part of the beauty here, so as a family we go really early or late in the evening for our trips to the beach and happily enjoy the stunning coastline. It would be hard to give it up.

We don’t have a pool at home but our son Daniel makes sure his little brother James doesn’t get a chair and climb the fence into one next door. Back-yard pools are still one of the biggest causes of drowning in children here in Western Australia. James loves being outside and the back door is always open, which is one of the joys of having a lovely climate. Saying that, they love the Irish weather too. Any time we are lucky enough to go home, they love to run through the woods where no snakes or spiders can kill you. Last Christmas day, myself and Erin did a charity swim in Cork. She was delighted to hear the only sharks I saw in Cork growing up were basking sharks - gumsie plankton eaters, unlike Perth’s great whites. The kids love going to Cork and consider themselves Irish. They even have Irish accents.

Being Irish, praising a politician is something I’ve rarely ever done

I have known my husband and his family all my life. We went to the same school and know a lot of the same people, so going home is always such a treat and I miss it at the moment with a pandemic and being on the other side of the planet. Sean is an electrician and works “up in the mines” sometimes. Everywhere you go there is red dirt. It is isolating and you can drive for hundreds of kilometres without seeing anyone. He loves to text me pictures of the massive snakes and spiders that are a frequent encounter there.

Being part of the Irish community here is important to us as we learned from living in Sydney for four years that no one quiet gets the Irish like the Irish. Myself and three other mums set up the Irish Families in Perth Facebook page eight years ago and it has had a huge reach, helping isolated Irish mammies and linking over 15,000 people. We also set up the Gaelic Games Junior Academy, so our kids have grown up playing hurling and football here in Perth.

I am finally back to work after being off for five months due to the coronavirus chaos. My husband Sean’s work as an electrician was busier than ever, so he never slowed down and his FIFO (fly in fly out) work in Western Australia, didn’t change much except that the mining companies now run their own Covid testing and temperature checks at airports before anyone flies.

It did quieten down in Perth for a few weeks at the end of March/early April, but most things are back to normal here now. Children only missed two weeks of school officially as the corona virus led nicely into the two-week Easter break and they have been back ever since.

In Western Australia (WA) the premier Mark McGowan shut down the borders and kept us all safe in our own bubble. Being Irish, praising a politician is something I’ve rarely ever done, but I’m delighted that he took his leadership role seriously when the world needs good leaders. Here in WA you can now go to a restaurant, cinema, swimming pool even an AFL game!

Of course the other side of that coin, we are trapped here. We cannot leave without an official exemption and if you do get home to family, it is usually for a very sad reason like a funeral and you cannot come back. This is tearing at the guts of ex-pats here, some of us have considered moving home completely, which is like sailing into a storm as we know the Irish economy has barely come off its knees and now this.

While the mini-lockdown gave us all a break from running around like headless chooks for children’s activities, it brought a fresh appreciation of the freedoms we do enjoy. Now heading into the spring and summer over here, we plan to enjoy a staycation, swapping the green grass of Ireland for the red dirt of WA. Cork will always be home, but thank God we can get Barry’s tea and Taytos in ‘Woolies’ in Perth to ease our cravings.