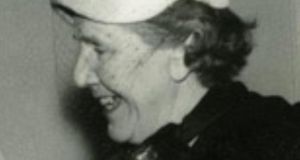 Josephine McNeill was the first woman to head an Irish diplomatic mission. She took up her post in The Hague 70 years ago in January 1950 and served in several Irish embassies around Europe until her retirement 10 years later.

She was born Josephine Ahearne in Fermoy, Co Cork, in March 1895. After attending Loreto Convent in the town, she studied French and German in UCD. She became a teacher and worked in schools in Mayo and Tipperary. She joined Cumann na mBan in 1918 and later said of her time in the organisation that she was mainly involved in propaganda work, feeding the men and occasionally carrying guns and ammunition for them, but that she was not “involved directly in any violent action”. She was elected to the executive committee around the time of the Truce in 1921.

She was an interesting choice to become Ireland’s first minister to the Netherlands because she was not a career diplomat. However, she was no stranger to the delicate art of diplomacy having gained invaluable experience when assisting her husband in the prominent roles he took up in the nascent Free State. She explained to The Irish Times why she thought she was appointed, “I married into diplomacy, for my husband was Irish High Commissioner in London and later Governor-General of Ireland”. She married James McNeill in 1923. James was a brother of the 1916 leader and later, government minister, Eoin MacNeill.

When she left Dublin Airport en route to The Hague in January 1950, she was seen off by various well-wishers, including members of the Netherlands’ diplomatic mission to Ireland and a delegation from the Irish Countrywomen’s Association. She had been a member of the ICA for many years at that point and had served as chair up to 1950. The ICA presented her, appropriately enough, with a bouquet of crimson and gold tulips. They also gave her a stained-glass panel by Evie Hone as a token of their affection and esteem.

One of the first major events that she was involved in in her time as the Irish envoy to the Netherlands was an “Irish Week”. It took place around St Patrick’s Day in March 1951. During the week, Dutch locals could view Irish art and Irish-made products were put on display in shops in all the main cities. The aim of the week was as much to promote Ireland in the mind of the ordinary citizen as it was to boost cultural and trade relations between the two countries.

It was predicted to be “one of the most interesting celebrations of the national festival in any foreign country this year”. Every possible avenue was covered; collections of Irish books on history and literature were sent to bookshops in the main cities, traditional Irish music could be heard playing in Dutch dancehalls and the national broadcaster aired special programmes featuring Irish songs and music. Irish food was even on offer on the menus of some eateries.

It opened with an exhibition of 50 Irish art works from the 19th and 20th centuries in the Stedelijk Museum in Amsterdam. The paintings by Walter Osborne, Nathaniel Hone the younger, William Orpen and John Butler Yeats, among others, came from the National Gallery of Ireland. Meanwhile, an exhibition of Irish photographs and a folklore exhibition that presented historic artefacts from the National Museum including St Brigid crosses, model boats, costumes, agricultural implements, and domestic utensils, were opened in the Museum of Ethnology in Rotterdam. In terms of the number and variety of events showcasing Ireland during the week, it was a resounding success.

She remained in her post in The Hague until May 1955. At her farewell audience with Queen Julianna, McNeill was conferred with an Order of the Grand Cross in the Order of Orange-Nassau. Her next diplomatic posting was to Stockholm where she stayed for one year. Her final posting was to Switzerland and she was also accredited as minister to Austria. Her location so close to many eastern bloc countries meant that she was able to keep the department abreast of events in that region, not least in Hungary following the uprising of 1956.

She remained in Berne until 1960 and spent her retirement in Leeson Park in Dublin. She died in 1969.

Women could only apply for the post of third secretary, the recruitment level in the diplomatic service, from 1947. It was not until 1973 that Ireland appointed its first female full ambassador. That was Mary Tinney, who joined the department as third secretary not long after the position was opened to women. She served in several diplomatic missions including Stockholm, London, and Paris, before being appointed ambassador to Sweden. Today, Ireland has 24 female resident ambassadors worldwide, a far cry from when Josephine McNeill took up the job.

Last couple in paradise: The honeymooners stranded in the Maldives
5