Even in Guatemala I will march to Repeal the Eighth 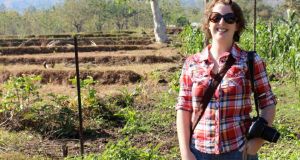 Since moving here in 2014 I have marched alongside Guatemalan women in four different demonstrations, using art and performance to make our voices heard and our demands seen. This year will be no different, except for one small detail: I will be joined by thousands of Irish women across the world who will march under the banner of “Repeal the 8th”.

A coalition of distinct organisations active in demanding control over their reproductive rights for Irish women have called for a national and international Strike4Repeal on International Women’s Day. Irish women everywhere who believe in a woman’s right to choose have been invited to down tools, stop working, refuse to assume care-taking responsibilities and take to the streets to demand that Ireland’s Government take action to ensure one of our most basic human rights: the right to bodily autonomy.

As an Irish woman living abroad I have been delighted to witness the global spread of the Repeal the Eighth campaign. In previous years, the most I could do was keep up with the news or sign the odd petition.

Over the last year, however, there has been a concerted effort on the part of the Irish feminist movement to include Irish women living abroad in the campaign. Because no matter how far away I am, nor how many years I have lived abroad, I still consider myself Irish through and through. I still feel connected to the social, cultural and political life of Ireland and I still concern myself with fate of Irish women.

Principal among these concerns is the continued denial of sexual and reproductive rights to Irish women. It has marked my life, my mother’s life, the lives of my friends and my relationship to my home country.

The Eighth Amendment was enshrined in our Constitution while my parents were planning to conceive their first baby – me. My mother voted “No” in that referendum but even still I wonder if she realised the impact the amendment might have on her future pregnancies and maternity care?

I was born in 1984, a few months after 15-year-old Ann Lovett felt she had no choice but to give birth alone and in secret in the shadow of a grotto in Co Longford. She and her baby died. Ireland’s culture of shame, fear and silence around anything related to sexuality, is what ultimately drove Ann to such desperation. She had no choice. In 1984 we still imprisoned women in Magdalene laundries for the “crime” of being unmarried mothers.

I was seven when the X case was going through the courts. I vaguely remember how my mother shed tears of indignation for Miss X, wondering what else would Irish women be subject to before the law in this country would be changed?

It turns out there was worse to come. I was 27 and graduating from a master’s in human rights in Galway when Savita Halappanavar died in 2012. I lived on the same street as University Hospital Galway. I couldn’t and still cannot understand how a miscarrying woman could be let die because of an article in the Irish Constitution. Those on the anti-choice side argue that we should #loveboth, but in this case both mother and baby died.

I was 30 when I came home to Ireland for Christmas after my first year in Guatemala. That visit was overshadowed by the story of a clinically dead woman kept on life support for a month because her 17-week-old baby still had a heart beat. Her family were left with no choice but to take the State to court over the Christmas holidays for the right to let her die with dignity.

Last year the UN Human Rights Committee – a body of independent experts who monitor implementation of the International Covenant on Civil and Political Rights by its State parties – found that Amanda Mellet’s right to freedom from cruel, inhuman or degrading treatment was violated as a result of Ireland’s criminalisation of abortion. She, and the many other courageous women behind the campaign “Termination for Medical Reasons”, have been denied basic medical care in Ireland that would save them from the risk and trauma associated with carrying an unviable pregnancy to term.

The Eighth Amendment has been in existence for 34 years. Is there not enough evidence to suggest that it has and will continue to put women’s lives in danger?

Living in Guatemala I witness overt gender inequality, injustice and violence every day. It is a very difficult country in which to be a woman: two women a day are murdered, more than 20 women a day are raped. Countless more have endured physical and sexual violence, often at the hands of partners or family members. Nevertheless, Guatemala’s abortion regime is more liberal than Ireland’s. Women can get an abortion when the life or the health of the mother is in danger, including when fatal foetal abnormalities are discovered.

I moved here to work in human rights and have since decided to dedicate myself to studying midwifery. Becoming a midwife for me means accompanying women in all their reproductive choices, without judgement. Under Guatemalan and Irish jurisdiction this, however, is not possible.

The criminalisation of abortion does not prevent abortion, it just pushes it underground or offshore. It drives women to back alleys, to use coat hangers or to order pills online. In Guatemala 13 per cent of all maternal deaths are the result of unsafe abortions. Globally 47,000 women’s lives are lost each year as a result of abortions practiced in unsafe conditions. I often wonder if it were not for Ireland’s proximity to England, would our maternal mortality figures also reflect this global trend?

I will be striking on March 8th in Guatemala because I do not want to wait another 33 years before we have laws in Ireland that reflect the reality of women’s lives in the 21st century and that guarantee our rights to life, health and bodily autonomy. The Protection of Life During Pregnancy Act, with its 14-year prison sentence for anyone found to have performed abortion, is not what I call progress.

This International Women’s Day, the “global strike for repeal” message will be heard not just in Dublin, London, New York and Sydney but also in Guatemala City and anywhere else this generation of young Irish women have emigrated to because, frankly, Irish women are done asking nicely.