‘Cities that were synonymous with drugs are now hipster havens’ 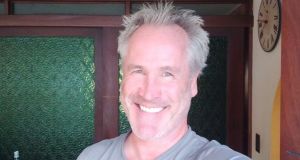 Cormac Ross: ‘Colombia is home, but I’ll always be an Irishman.’

After almost 30 years in Colombia, Cormac Ross says his adoptive country has undergone monumental change, mostly for the better.

“When I first arrived here in 1991, it was very much a narco state. The streets were dangerous, homicide rates were high and tiger kidnappings were rampant. But, slowly, it’s become a great destination to live, work and holiday,” he says.

After completing a degree in University College Dublin (UCD) in English and history, the Trim, Co Meath native left Ireland in 1986 to work in London.

It was to become the foundation of his career. When Ross moved to Oxford, he taught English at the English Institute. After meeting his now Colombian wife there, a move to Santa Marta on the Caribbean coast in November 1991 swiftly followed.

The couple moved onto Barranquilla – famous for its carnival – in January 1992, also teaching English for a year, before finally settling in Bogota, Colombia’s capital city and home to more than seven million people in 1993.

“We’ve been here ever since. At first, I started working with the British Council, teaching English as a foreign language, immersion and integration to students.”

Our business was badly hit by coronavirus ... but we’ve adapted with these online options

Then, in 2000, Ross opened his own language school called Study Agency, which works with corporations, multinationals, government agencies, colleges and individual clients, providing training solutions for their English needs.

“The language school doesn’t have on site students or classes, rather we outsource classes, teaching general English, business English and conversational English to clients who range from absolute beginners to advanced students. Our three-day and one-week immersion courses are designed to give the participants a unique opportunity to interact in English continuously from early morning to late at night,” he says.

During coronavirus, which saw Colombia go into strict lockdown from mid-March, the school adapted by tailoring an “English in the time of Corona” course.

“Every course we offer in traditional face-to-face classes, is also available online. We use Zoom for one-to-one and group classes.

“Obviously our business was badly hit by coronavirus, as clients lost jobs and companies were affected in every way, but we’ve adapted with these online options. People still need to speak English.”

Ross says he has had some very interesting clients over the years, most notably “the Colombia Three”.

“During the 1990s when we first moved here, there was just a small community of Irish people – around 40 or so, living in Bogota. We were always mistaken for Dutch or English people, but all that changed when the Colombia Three came to prominence in 2001 and everyone knew where Ireland was.”

The three Irishmen, who were allegedly members of the provisional IRA, were on trial over training Farc paramilitary rebels in Colombia in bombmaking, while using fake passports.

The trial opened in December 2002 and ran until August 2003 following a number of adjournments.

“There were a number of people over from Ireland, including Paul Hill from the Guildford Four, senators including Mary White and lawyers over for the trial, and we did translation, interpreting and liaison work with various Colombian officials.

“The trio fled Colombia for Ireland after they were found guilty and handed down heavy prison sentences,” Ross adds.

“That’s the thing about living here, there’s always something going on, though the socio-economic situation has improved exponentially.

“We still live in gated communities, with metal fences, but cities that were synonymous with drugs, are now hipster havens with great culture and beautiful buildings, like Medellin, home of drug kingpin Pablo Escobar, which is 10 hours drive from here.”

Bogota still has problems, which he fears will be worsened after lockdown fully ends.

“There will be ramifications. It will be a social services time bomb, so I expect a lot of the good work that has been done here to be unravelled, which is a shame. I fear now that the authorities have been lax and the cartels are looking after people in neighbourhoods, feeding them and thereafter gaining more power. This virus will affect the poor down here, more than anything else.”

I’ve never been an adult in Ireland, so my reference points are pretty poor at this stage

Nonetheless, Ross says he and his family are firmly entrenched in Colombian life, rarely coming home.

“At the start, we used to come back to Ireland because we always had the month of December off but then, when we had our two daughters, we decided to take the month to travel around South America instead.”

“That said, I speak English with my daughters and they’ve been to Ireland to visit relations and have Irish passports. We also enjoy hanging out with Irish people and I’m very much part of the community, especially since the Irish embassy opened here last year.

“I really love seeing the greening of various landmarks around Colombia and am involved in the St Patrick’s Day celebrations.”

Ross didn’t expect to end up in South America, when he went to the UK in in the 1980s, but he hasn’t looked back.

“I’ve never been an adult in Ireland, so my reference points are pretty poor at this stage. I’m not always in the loop of what’s going on and don’t have many friends there anymore.”

In terms of living and working in Colombia, he says acquiring a visa is pretty simple. “You can get a three month tourist visa and, once that runs out, you can go to an English/Irish agency, like mine, and then we sponsor visas. It’s not usually a problem. Eventually you go for citizenship, which I have.”

“I’ve been here a lot longer than I was at home. Once you get past a few issues, you can have a great life here. There are great restaurants and culture in Bogota and beyond. Colombia is home, but I’ll always be an Irishman.”