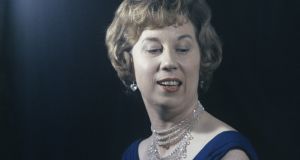 It’s a little known fact that one of Ireland’s first blues and jazz singers was the Hiberno-Latvian singer Otillie Patterson. A native of Comber, Co Down, her parents met while her father was serving with the British Army in the Caucasus Mountains and they were married in Georgia in 1919. Patterson was born in January 1932 and her name is actually an anglicisation of Ottilja, a common Latvian name.

She developed a love for music from a young age, influenced by both the folk music of her native Latvia, and the melodeon and fife (a type of small flute) commonly played at family gatherings in Northern Ireland. She began taking piano lessons as a child but favoured blues over classical after she heard it played during a movie at the local cinema.

She performed for small groups of family friends and locals, and in 1943, aged 11, she played for a party of American soldiers stationed in Northern Ireland. Her other chief talent was drawing and in 1949 she won a scholarship to attend the Belfast Municipal College of Technology where she took a degree in art.

During her college years she sang with local jazz and blues bands, and formed the Muskrat Ramblers with the Watt brothers in 1952. After graduating she found herself working as an art teacher at the Ballymena Technical College, but found the job wasn’t exciting enough to keep her attention.

During a trip to London in 1954 where she met the singer Beryl Bryden who took her to blues gig around the city. She held an impromptu performance of her own at a gig in Soho and some local musicians took notice, impressed by her vocal abilities.

She auditioned for the Chris Barber a few days later and was offered a job with the band at Christmas. It was an offer she happily accepted. She quit teaching and began touring with the band and her first public performance at the Royal Festival Hall the following January received rave reviews from all of the journalists in attendance. They praised her ability to sing the popular blues hits so convincingly and were impressed by her vocal range.

For the next seven years the band toured almost constantly across the United Kingdom and Ireland, and built a name for themselves as one of the most popular acts of their day. Their audiences loved Patterson’s stage presence and were particularly fond of her duets with the Scottish skiffle king, Lonnie Donegan. She also frequently decided to accompany herself on piano to showcase the full range of her talents. When the big name American blues outfits crossed the Atlantic to tour the UK, it was the Chris Barber band that would accompany them and Patterson would often share the stage with household names like Muddy Waters, Sonny Boy Williamson, Big Bill Broonzy, Sister Rosetta Tharpe and others.

Each artist she performed alongside left an impression on her and her style developed over time incorporating new techniques and adding greater authenticity to her singing. Touring alongside so many notable African-American singers also brought home to her the racism they faced in the USA and elsewhere, and the important role blues and soul music played in empowering those involved in the emerging Civil Rights movement.

In 1959 Patterson married Chris Barber and the band also had its first major US hit, a cover of Sidney Bechet’s Petite fleur. A number of US tours followed and the novelty of a white Irishwoman singing blues attracted media attention and an endless number of curious audience members to their performances.

The San Francisco Examiner rather grandiosely referred to her as “the world’s only Irish blues singer” while the audience at the 1962 Washington Jazz festival was so impressed by Patterson’s performance that Duke Ellington had to wait 10 minutes before beginning his set. So impressed were her fans that an African-American lady at a show where she sang alongside Muddy Waters in Chicago was heard to remark “Hey, lady, you sing real pretty. How come you sing like one of us?”

Eventually the strain of performing more than 200 gigs a year took its toll on her voice and her mental health, and she effectively retired from singing by the mid-1960’s apart from the odd special event. After returning to Northern Ireland she remained married to Chris Barber though they would later divorce in 1983. Patterson would move to Ayr in Scotland five years later where she ended her days. Her legacy lives on.