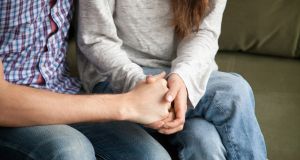 Heartbroken: it is times like these you need your friends and family, but we have learned to rely on ourselves. Photograph: iStock/Getty

My husband and I have been lucky enough to keep our jobs in Germany during the coronavirus pandemic. I work from home for a fintech company, and my husband works for an energy company. Germany felt like it was on the ball when the outbreak started in March, and we were grateful to be here and not in the UK. We had moved from London a few years previously and were worried for friends and family there. The British government was much slower than the German or Irish governments to act.

If feels like a lifetime ago that we were in Ireland. Being able to visit regularly was something we took for granted; it seems such a privilege now.

It was February when we last flew back with some very exciting news. We were expecting! We brought all our scans, as well as our Mutterpass, or mother’s pass, a booklet pregnant women carry with them in Germany that has all of the details of their pregnancy, in case there is an emergency. We were eager to show them off to our families.

We landed in Dublin bursting with excitement to share our long-awaited news. We had been unlucky before and had two miscarriages. We told our families, who were overjoyed

We had heard about Covid-19 in Asia, and we were a little worried, but thought it was safe to travel. We wiped down the seats on the plane, had the air vent on full blast and carried antibacterial gel. We thought we were being over the top but did not want to test fate. Looking back now, we realise we were very naive.

We landed in Dublin bursting with excitement to share our long-awaited news. We had been unlucky before and had two miscarriages. We told our families, who were overjoyed.

My parents were so excited for their first grandchild that we went out shopping for prams and all the baby gear, even though it was far too early. It was a sweet moment I will always look back on fondly.

Four days later we got a call from my gynaecologist in Hamburg, asking me to come in to see her that day. My heart sank. I had taken a Harmony test, a non-invasisve prenatal test, a few weeks before flying back to Ireland, and it had come back with strong indicators for trisomy 18, or Edwards syndrome. We were distraught but understood these tests can often give a false positive, so we remained optimistic.

We flew back to Hamburg and had a chorionic villus sampling (CVS) test. It came back positive for trisomy 18. Our doctor told us it would be highly unlikely the baby would make it to term, and if it did it would most probably live for only a few hours. We could not bear the idea of our baby suffering. The doctor said it was an easy decision, as the odds were so against the baby.

We decided on a termination, the most difficult decision we have ever made. We were past the 12-week cut-off for an abortion (in Germany abortions past 12 weeks are illegal unless there are medical grounds), so there was a lot of paperwork to complete. I understand this is hard for some people to read, but I know so many others have the same story and can relate. I ask you to reserve your judgment and be kind. This is a reality for so many couples.

Freddie passed away on March 6th, in the middle of a worldwide pandemic. It was devastating, and we will never forget the joy he brought to us in those first four months when he was our little secret

We found out later that we would have had a boy. We named him Freddie. Freddie passed away on March 6th, in the middle of a worldwide pandemic. It was devastating, and we will never forget the joy he brought to us in those first four months when he was our little secret.

We will also never forget the unbelievable kindness we were shown by the German doctors and nurses during our ordeal. They were so sad for us, and we were so grateful that they made the whole process bearable. We had Freddie’s remains cremated and had planned to scatter them at Old Harry Rocks, on the Jurassic Coast, the Unesco World Heritage site in southern England, where we got engaged.

Covid-19 has meant that Freddie rests beside our bed in his little urn decorated with blue balloons for a little while longer. It is times like these you need your friends and family, but we have learned to rely on ourselves. We would love to go home to visit our families again. Mentally it would do us good. But we have learned that so much in this life is out of our control. Our lives have been paused, and we are eager to move on. We hope to be home for Christmas, but who knows what plans God has in store for us this time around.

If you would like to share your experience of how Covid-19 is affecting you, email  Irish Times Abroad at abroad@irishtimes.com