50 years of the life aquatic

They started with no boats, no cylinders and woolly diving gear. Half a century on, the Irish Underwater Council is coming up for air 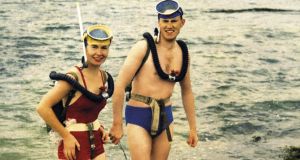 Underwater adventures: the first president of Comhairle Fo-Thuinn, Shane O’Connor, and his wife, Betty, about to go diving at Carraroe, Co Galway, around 1959 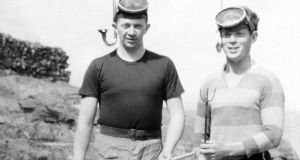 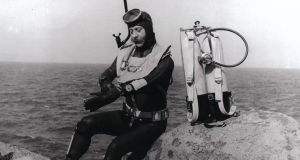 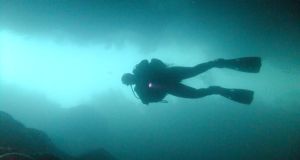 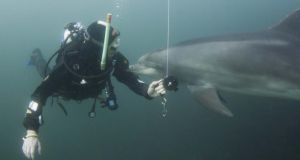 In the gear bag: three or four pullovers, shirts and Army long johns. From the shoreline: swim out, invert and hold your breath.

When Mick Moriarty took up diving in Ireland, more than half a century ago, the best equipment and approach, he says, were what you had in your head.

“I’ve caught fish with a spear while holding my breath, and it certainly wasn’t off some island in the Pacific,” says Moriarty, a former Army officer. “When I began we had no such thing as access to rigid inflatable boats, never mind a car each to get there. We would just launch ourselves from the shore or rocks, wearing big lumpy woollen clothing, to give us the illusion of being warmer,” he says.

“But of course we weren’t, and it was awkward, and you were far worse off when you got out than if you had nothing on at all. We would get all the way down to 10m, or 35ft, for a few minutes, and it was wonderful, but it was very much a mental thing.”

Moriarty is a founder member of Comhairle Fo-Thuinn, the Irish Underwater Council, which celebrates its 50th anniversary this year. A fellow pioneer, Ronnie Hurley, now 80 and still active, clearly remembers his first dive with Moriarty, “in a lovely rocky cove” off Spanish Point in Co Clare.

Hurley recalls wearing Moriarty’s latex drysuit and being shown how to use twin corrugated-rubber breathing hoses. It was awkward, for the hoses would fill with water if the mouthpiece came out, Hurley remembers in an account written for Limerick Sub Aqua Club. There was no such thing as a nonreturn valve, so “your next breath would then be a fill of water instead of air”.

“The trick was to first invert your head to the left, and blow out all the water with all the air that you had left in your lungs,” Hurley recalls. Then a rope was tied to his wrist, and he was “launched into the deep blue yonder”. The solo dive “lasted all of 10 glorious minutes, to something like 10m”, he says.

So ingrained is the buddy system of pairing up for safety in modern sports diving that the adventures of Moriarty, Hurley and others may seem beyond daft now, they admit.


Jacques Cousteau
Moriarty has described his own first undersea experiences in his autobiography, Submerged, which charts the evolution of diving before, during and after the second World War, and the revolution in the sport after a French gas company engineer, Émile Gagnan, was asked by the French underwater explorer Jacques Cousteau, who was a captain in the French navy at the time, if he could develop a better breathing device.

Gagnan came up with the open circuit valve, or diving regulator, which expelled air into the water when the diver exhaled, and which Cousteau refined. In spite of many developments since 1942, including the rebreather system of using oxygen instead of air, divers all over the world still benefit from that partnership, Moriarty points out.

Cousteau’s classic book The Silent World, and his underwater films, have inspired millions of people, not least the early members of Comhairle Fo-Thuinn.

A Manchester-born radiologist, Dr Douglas Boyd, took what is believed to be the first amateur sports dive on this island, in Strangford Lough, at Portaferry, in 1945.

Ten years later Boyd formed a branch of the British Sub-Aqua Club in Belfast, and within several years there were similar groupings south of the Border, led by the Army, the Garda, students at University College Galway and enthusiasts in Limerick.

It was thanks to a group of divers from the North that Moriarty and others experienced their first air-on-demand dive, using cylinders, in Carraroe, in Co Galway, in 1958.

When Comhairle Fo-Thuinn, an all- island representative body, was formed, in 1963, the Belfast club committed its support from the outset.

The council’s first logo, a trident, was designed by its first president, Capt Shane O’Connor, and the voluntary organisation began to develop training standards and grades.

One of Comhairle Fo-Thuinn’s earliest encounters with officialdom was over the practice of taking home a few shellfish after expeditions. This had resulted in a certain amount of tension with inshore fishermen when it emerged that some divers were selling crawfish, scallops and sea urchins for export to France.

Charles Haughey, who was minister for agriculture and fisheries at the time, proposed a ban. He agreed to meet Comhairle Fo-Thuinn representatives, who suggested that a system of limited catches might be more realistic. Haughey “didn’t agree that it was necessary to take a lobster simply to enjoy a dive”, says Moriarty. The minister also claimed to have tried out diving. The Army officer doubted this but wisely kept his counsel.

The Comhairle Fo-Thuinn delegation left feeling happy to have presented a good case. The next day the new bylaw banning “skin diving for shellfish” was published in the daily newspapers. “Haughey knew all along . . . We had all of £25 in our bank account. It was a sizeable sum then but not enough for an appeal,” Moriarty says. “We had to let it go, but I now think the minister was probably right.”


Coastal wrecks
Divers were already turning their attention to the hundreds of wrecks around the 7,800km coastline, including the galleons close to shore that were attached to the ill-fated Spanish Armada of 1588. The pioneers were Des Branigan, a former merchant seaman, salvage expert and trade unionist, who worked with the Welsh amateur diver Stanley Wignall to locate the Santa Maria de la Rosa in Blasket Sound, in Co Kerry, and Robert Stenuit, a Belgian who located the Girona, along with its trove of coins, jewels and gold ornaments, off Co Antrim.

When the National Museum of Ireland was initially approached, in 1972, its line was that Armada wrecks were “not of historical significance”, Moriarty says, but it was thanks to the persistence of amateur divers that 19th-century legislation covering wrecks was updated to prevent looting.

Four decades later Irish divers have a close relationship with the underwater- archaeology unit of the Department of Arts, Heritage and the Gaeltacht, and have undertaken many licensed expeditions on wrecks, including SS Laurentic, the White Star Line vessel, carrying gold bullion, that struck a mine off Lough Swilly, Co Donegal, in 1917; RMS Leinster, which was torpedoed off the Kish Bank in 1918; and Lusitania, which was torpedoed off Kinsale, Co Cork, in 1915. The State’s national seabed survey has pinpointed thousands of other wrecks.

Comhairle Fo-Thuinn’s president, Richard Thorn, says that the organisation’s members – of whom there are 2,500, in more than 70 clubs – have developed interests that range from snorkelling and trips abroad to underwater hockey and working, with Canoeing Ireland, on blueway trails on the west coast.

There’s another, less publicised, aspect of the sport. Comhairle Fo-Thuinn members have helped Garda and Naval Service teams on many search-and-recovery dives, both offshore and inland, during which several volunteers have lost their lives. And since 1976 divers in Galway have voluntarily worked with medical staff to run the public hyperbaric chamber at University Hospital Galway, which treats not only the bends, or decompression sickness, but also people with certain medical conditions.

“Cousteau said that it was an active sport for grandmothers, and I’d be inclined to agree,” Thorn says. He also quotes the late Jerry Garcia of the Grateful Dead, who compared diving to a physical form of meditation: “It’s so silent you’re like a thought.”