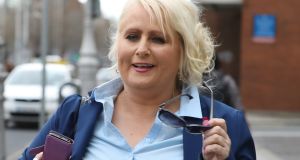 A High Court damages award to a hairdresser who banged her knee against the leg of a table while sitting down to dinner may have serious repercussions for hoteliers and restaurateurs.

Ms Justice Mary Faherty heard Annette O’Connor had been directed to a table in the Mullingar Park Hotel restaurant, had waited while the manager withdrew her chair, then sat down and injured her left knee as she pulled her chair in to the table.

Ms O’Connor (48), of The View, Larchill, Santry, Dublin, had booked Mother’s Day weekend at the hotel with five friends in March 2011.

She claimed that being directed to the table setting right over the leg, which was concealed by a table cloth, constituted “a trap” and negligence on the part of the hotel owners, Euro Plaza Hotel Limited, which trades as the Mullingar Park Hotel.

Ms O’Connor told Padraig McCarton SC, who appeared for her with barrister Paul Twomey, that she had not been given any warning from the restaurant manager that the leg was hidden right beneath where she had been directed to sit.

She said the group of friends had been staying as guests and booked a table in the dining room for the Saturday evening and had been shown to their reserved seats by the restaurant manager.

She told Mr McCartan, who appeared with Murphy Brady Solicitors, the dining table had been set in advance and was covered with a long tablecloth.

She had been awarded €18,000 damages at Mullingar Circuit Court by Judge Doirbhile Flanagan, whose judgment was appealed to the High Court.

Ms O’Connor’s legal team claimed negligence against the hotel on the basis the table set-up constituted a trap or hazard for patrons and that their client had been directed to sit in an unsafe spot.

It was alleged the hotel had obscured her view of the legs by use of the tablecloth, and had failed to warn her of the presence of the metal leg she struck. It was also claimed the table place setting had been prepared in “a reckless or careless and inattentive manner”.

Ms O’Connor claimed she immediately felt pain and shock but had her meal before retiring to her room where staff had brought her an ice pack and a drink to settle her nerves.

When she returned home she had attended her local doctor, the Beaumont Hospital for X-rays and later a specialist in muscle spasm. The injury had disrupted her personal and professional life as a hairdresser.

Judge Faherty said she accepted it was foreseeable that an incident such as occurred could and did happen, and that liability lay with the hotel.

Contributory negligence could not be applied to Ms O’Connor as she had been specifically directed to the table and could not reasonably have been expected to have embarked upon an investigation as to where the legs were.

Witnesses on behalf of the hotel told the court the table was one of a type used all over the world and had been found to be perfectly suitable in the global catering trade.

A forensic engineer said that if he had been asked to risk assess the set-up in the dining room, he would not have directed the hotel to warn people about the presence of the table leg under the tablecloth.

“Our members have been on the phone to us here and there is major alarm out there over this,” he said. “Something needs to be done immediately.

“The rising cost of insurance is due to this sort of claim and award by the judiciary. It seems to be getting worse and worse by the day.

“There has been a marked increase year on year in the size of the awards given by the courts. Insurance companies are not willing to fight the cases all the way, so they cave in straight away and back down on claims.”

Mr Cummins added that many smaller restaurants do not have the resources to fight claims in the courts.

“The State is well able to do that with all the resources it has at its disposal, but there are major risks for businesses in doing that unless the insurance company fights it all the way," he said. “It’s dysfunctional and needs to be reviewed.”

1 Irish in Australia: ‘We are in for a few hard years’
2 Gardaí cannot prosecute people who breach midlands movement restrictions
3 All eyes on Tenet, the spy movie with everything to prove
4 Covid-19: One more death and 174 further cases confirmed in State
5 German nudist chases wild boar that stole laptop at Berlin lake
6 Meet the Bearman of Buncrana: ‘I knew about Joe Exotic for years’
7 Midlands lockdown: ‘Why shut down Offaly and leave Dublin open?’
8 ‘Saudi Arabia is where the opportunities will happen in future’
9 Are we really facing the death of the office?
10 Harry McGee: We are seeing the return of Straight-Talking Leo
Real news has value SUBSCRIBE