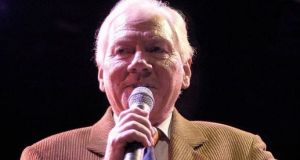 Gay Byrne has confirmed he received information on overreporting of Garda breathalyser tests which he passed on to Leo Varadkar in early 2014. File photograph: Getty Images

The former chairman of the Road Safety Authority, Gay Byrne, has confirmed he received information in regard to the overreporting of Garda breathalyser tests which he passed on to then minister for transport Leo Varadkar in early 2014.

“I received an anonymous letter from a disheartened young man who had joined the Garda Reserve,” Mr Byrne told The Irish Times.

“He found that the guards wouldn’t work with him at all, and he became very disillusioned by the way the Garda Síochána went about its business. He was leaving the Reserve and applying to join the Metropolitan Police. I passed it on to our minister, Leo Varadkar.”

Mr Byrne, who retired as chair of the RSA in June 2014, was not sure what reference if any had been made to the breathalyser issue in the anonymous letter. “I don’t remember clearly whether he made strict reference to that,” he said.

In a statement on Monday, the Garda said it had first been made aware of the issue on April 11th, 2014, when Mr Varadkar wrote to the Commissioner “advising of [anonymous] correspondence received from Mr Gay Byrne, chairman of the Road Safety Authority, containing allegations in relation to the manner in which Mandatory Alcohol Testing (MAT) checkpoints were being performed (in the West of Ireland). The letter also contained allegations in respect of the lack of enforcement of road traffic legislation.”

Minister for Justice Frances Fitzgerald confirmed on Tuesday that the complaint made to the Road Safety Authority had outlined a number of issues which included the operation of MAT checkpoints.

“This complaint was referred to An Garda Síochána by the then minister for transport, tourism and sport,” the statement said.

“An Garda Síochána indicated in a detailed letter to my department in May 2014 that they had looked into the claims regarding MAT checkpoints and they were satisfied that correct procedures were in place to account for MAT checkpoints that ultimately did go ahead.”

Asked what he made of the current controversy, Mr Byrne said: “I remember talking to a very smart, impressive young man who was a member of the Garda Síochána – real future commissioner material – and saying to him that the Garda were not very well managed.