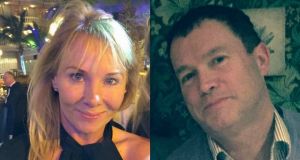 Ruth and Kevin Burke who are feared to have died following the helicopter crash in Wales. Photograph: Facebook 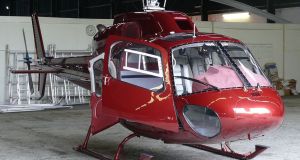 A stock picture of the privately-owned twin squirrel red helicopter that crashed in north Wales with five people on board. Photograph: High Level/Rex/Shutterstock/Guardian Service 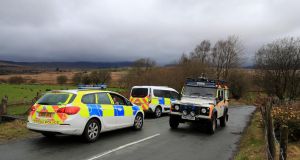 Five members of a family with strong Irish connections have died after their helicopter crashed in north Wales.

The helicopter was en route to Weston Airport in Dublin when radar contact was lost and it crashed amid poor visibility on Wednesday afternoon.

Police, emergency services and air accident investigators on Thursday reached the site of the crash in the Rhinog mountains in Snowdonia National Park.

The recovery effort is ongoing but North Wales police said it may have to suspend operations overnight due to “worsening weather conditions and the difficult and treacherous terrain in the area”.

The five victims are all adults and part of the same extended family from the Milton Keynes area in Buckinghamshire, police said.

They have not yet been formally identified but their families are being supported by specialist police.

Among the dead were businessman Kevin Burke, his wife Ruth Burke, and three other close relatives.

It is believed Ms Burke was originally from Dublin and her husband was the son of a Co Mayo man.

The couple had an address at Brook Farm in Hulcolte, near Milton Keynes, from where the helicopter is thought to have taken off.

Relatives and friends of the Burke family in north Mayo expressed shock at the news, and described how Kevin and Ruth Burke had been expected to visit the west this weekend.

Locals said Kevin Burke and his brothers Barry and Donal were frequent visitors to Kilcummin in Killala Bay.

Their father Donal was from Kilcummin and emigrated with his Dublin-born wife Nolly to England, where he worked as a contractor.

The three brothers, and a sister who lives in the US, returned to Kilcummin for summer holidays as children, and maintained their Mayo links.

The five passengers were said to have been coming to Ireland for a family event.

Mr Burke is reported to have owned the red Airbus Twin Squirrel helicopter through his company, Staske Construction Limited.

He is said to have been an experienced pilot who flew to Manchester on an almost daily basis.

A family spokesman said: “Six children have lost their parents in this tragedy. At this stage the family wants to be left alone to be able to deal with their grief over this terrible loss and concentrate upon looking after the children.”

When no wreckage was sighted, the search switched to land and the wreckage and bodies were found on Thursday.

1 Irish in Australia: ‘We are in for a few hard years’
2 All eyes on Tenet, the spy movie with everything to prove
3 German nudist chases wild boar that stole laptop at Berlin lake
4 Gardaí cannot prosecute people who breach midlands movement restrictions
5 Covid-19: One more death and 174 further cases confirmed in State
6 Cambodia Bill to ban women wearing short skirts sparks outcry
7 Meet the Bearman of Buncrana: ‘I knew about Joe Exotic for years’
8 Midlands lockdown Q&A: Firstly, is it a lockdown or not?
9 Midlands lockdown: ‘Why shut down Offaly and leave Dublin open?’
10 Pat Hume: The woman who never gave up
Real news has value SUBSCRIBE