West Belfast Sinn Féin: ‘The old certainties of 10 days ago are gone’ 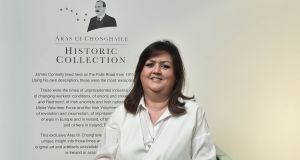 The gobsmackery about Sinn Féin’s performance in the general election applies north of the Border, just as much as in the South. Even party supporters are struggling to find the right words.

Loretta McKee, from the Falls Road in west Belfast, says that on the advice of a friend she settled for “stupendous”.

“I’ve been using it quite often,” she says in the James Connolly Visitor Centre on the Falls Road, where she is having lunch with Joe Austin, a former trailblazing Sinn Féin councillor who is now retired from electoral politics.

How about Mary Lou McDonald for taoiseach?

“Absolutely,” says McKee. “Why would you not want her to be taoiseach? She just stands for everything that is good.”

She knows well that housing and health were big reasons for the Sinn Féin tsunami but feels Irish unity too was a factor in its success.

“If you scratch the surface of people in the 26 counties, that patriotism is there.”

“I think it would pass,” McKee adds.

As for unionists alarmed by the Sinn Féin surge, she says: “If they really listened to [what Sinn Féin offers], we could have a great Ireland for them too, for everybody.”

Everybody in the centre is surprised and delighted with the result.

Jude Brennan, from Ardoyne in north Belfast, has crossed the city to see the Connolly centre with his son Finnbarr, daughter Enya and her fiance, Conor.

“I am surprised, but it is a good surprise,” says Brennan, who reckons James Connolly would have been delighted with the result.

Another visitor, Ciaran O’Clarkin, says the result was a “bolt out of the blue” that would accelerate the drive for a united Ireland. “This is the time to push for it,” he says.

“Euphoric,” is the word chosen by Joe Austin, one of the first Sinn Féin councillors elected to the former bear pit of Belfast City Council.

“People are euphoric about the result. Anybody who tells you that they saw it coming, or predicted it, should be reading palms.”

Austin isn’t impressed with Fianna Fáil leader Micheál Martin’s pre-election insistence that he could not work with Sinn Féin for “moral” reasons.

“Micheál has either no sense of history and therefore does not know where his own party came from, or he has no sense of vision and doesn’t know where we can all go to,” he says.

He suggests the Fianna Fáil leader “should take the advice that he gave us” when urging Sinn Féin to go back into the powersharing Executive at Stormont.

“People need to understand, whether they like it or not, we have a new situation. The old certainties of 10 days ago are gone,” he adds.

“You know, we can sit here for ever and a day and complain about what was done unto us or even complain what we done unto others. You can do that and it’s okay or you can talk about planning a future, a new beginning, for us all.”

Séanna Walsh, director of the visitor centre, opts for “amazing”. He is a former IRA prisoner who had the task in July 2005 of telling the world the IRA’s armed campaign was officially over.

Walsh spent some time canvassing for Seán Crowe in Dublin and, while he expected the eventual poll topper to be safe, he had no “sense of the overwhelming vote that he got”.

Walsh wonders would the numbers stack up, and would it be sustainable, for Sinn Féin to form a government with the smaller parties and independents.

Regardless, he adds that it is vital that Sinn Féin get into government. He quotes the Irish Congress of Trade Unions’ assistant general secretary Owen Reidy, who at an event in the centre on Saturday offered the line that a “radical opposition is no friend of the working class”.

“You can have all the revolutionary policies in the world but unless you are prepared to go in and get your hands dirty, it doesn’t mean anything. You have a responsibility for the people who voted for you to go in and govern,” Walsh says.