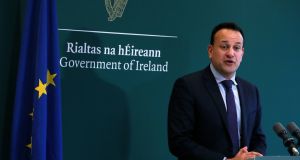 Taoiseach Leo Varadkar has pledged to cut income taxes and increase the old-age pension, while also securing an above-inflation pay hike for public sector workers, ahead of the next general election.

Mr Varadkar said the Fine Gael election manifesto would have provisions that “involve making sure that fewer people pay the highest rate of tax and a number of other measures as well”.

“And that involves, yes, reducing income tax and USC, but it also involves some of those other measures that reduce the cost of living, like subsidised childcare, like extending free GP care, like reducing prescription charges and if we keep the economy strong and keep the public finances in order, the possibility of doing so much more in the next five years is enormous and I really want to be the person to do that.”

In his annual roundtable interview with political correspondents, Mr Varadkar said he hoped future budgets would see increases for pensioners through an index-linked welfare system.

The current three-year public sector pay deal, which expires at the end of 2020, has seen average annual rises of 2 per cent.

In relation to a planned subsequent deal, Mr Varadkar said: “I can see a rise faster than the cost of living. That’s what people generally want, for their pay to go up faster than the rate of inflation.”

He said: “We also need to make sure it’s affordable for the taxpayer... [and] sustainable. We don’t want to go back to the past where we had massive pay increases one year and pay cuts a year later. We want people to know that their pay increases are forever and won’t be taken away again.”

On housing, Mr Varadkar said he was not “ashamed” of the Government’s performance despite record levels of homelessness.

He said that “rather than being ashamed, I’m encouraged by some of the progress that has been made in the last couple of years”.

Mr Varadkar said the number of new homes being built had trebled over the last 3½ years.

“And we’ve seen us embark on what is the biggest social housing programme in many, many decades, to the extent that we’re adding 10,000 homes to social housing stock this year.

“We’ve also seen 15,000 people benefit from help-to-buy, first-time buyers getting on the property ladder who wouldn’t have had enough [had] it not been for the schemes we introduced.”

He said the “truth” was that “pretty much every party has held the housing brief over the last 20 years, Labour, Fianna Fáil, the Greens and a lot of the flaws in our housing system are mistakes of all of us”.

“I do get worried when I listen to other parties just throwing out housing policies and you know you see that from the main Opposition, from Fianna Fáil. Deputy [Micheál] Martin goes to the Ógra [Fianna Fáil] conference and says he’s going to have a lower rate for VAT on some housing, doesn’t bother checking the EU directive which says you can’t do that, or doesn’t care.

“Then he goes to another conference and says that he’s going to ensure that the Central Bank changes its mortgage rules.”

Mr Varadkar said the Fianna Fáil leader “either doesn’t know or care that the Central Bank is independent under Irish law and European law”.

He also accused Fianna Fáil of being inconsistent in relation to its position on rent controls.

“You know, that’s the kind of rubbish you’re hearing from Fianna Fáil on housing, they should be embarrassed to talk about it quite frankly.”