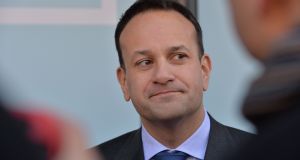 Taoiseach Leo Varadkar has said the likelihood is that he will be the leader of the Opposition in the new Dáil but if Fine Gael is needed to provide political stability, his party is “willing to talk to other parties about that”.

Mr Varadkar said “anything is possible” in the coming weeks, “including a second election”. However, Mr Varadkar said a second general election was not an outcome he thinks would be “good for the country”.

The Taoiseach was speaking to reporters on Wednesday morning, after addressing the European Financial Forum in Dublin Castle.

“I think the likelihood is that at the end of this process that I’ll be the leader of the opposition and obviously [if] my new parliamentary party still want me to do that, I will want to do that,” Mr Varadkar said.

The Fine Gael leader said Sinn Féin had emerged as the largest party and so “responsibility now falls on them to build a coalition”.

“We were defeated in this election, there’s no point in trying to dress that up in any way. It may have been a tight finish but we were defeated so that means that people are saying to us Fine Gael should go into Opposition and we’re absolutely willing to do that,” Mr Varadkar said.

Mr Varadkar said he had not been involved in “any talks” about a Fianna Fáil, Fine Gael and Green coalition.

“Sinn Féin have emerged as largest party, at least in terms of votes,” he said. “It is their responsibility now to try and keep those remarkable promises they made to the Irish people which got them so many votes and that means the onus is on them now to form a government, either with left wing parties or with Fianna Fail and to get Dáil approval for a republican socialist programme for Government.

“If they fail, then obviously we’ll consider matters then. That’s where things stand now.”

“In terms of what may happen later on in this process, in the next couple of weeks, Fine Gael, my party is the party of the founding of the State...There’s another party that was founded in 1971 called Sinn Féin which has a fake history that says otherwise, but we’re the ones who founded the State, we’re the ones who established institutions, we’re the ones who made this country a Republic.

“We will stand by the State and the Republic and if we’re needed in order to give the country political stability with governance, well then we’re willing to talk to other parties about that.”

Addressing the European Financial Forum, Mr Varadkar said guests had arrived at “a historic time in our country’s history, only days after a general election, which has transformed our political landscape here in Ireland”.

“Saturday was a day of reckoning for all political parties and now in the days and weeks ahead there’s an obligation on all of us to show that we can provide leadership, political stability and economic security and work together to build a better future for all of our people. I believe we can and I believe we will,” he said.

“The political centre in Ireland has been shaken, it’s diminished but it has held, it still represents the views of the majority of people and the majority of representatives in our new parliament, Dáil Éireann. The dark future, the Second Coming prophesied by WB Yeats, has not yet come to pass.”

Sinn Féin is meeting with a number of smaller parties as it launches exploratory negotiations in an attempt to a form a government.

The party’s chief negotiator in attempts to form an administration, Pearse Doherty, said it has “reached out” to the Greens, Solidarity-People Before Profit, Social Democrats and Labour.

“Obviously our first port of call is to talk to those parties where we would have a common platform, to tease out with the possibility of putting together a government for change,” he told Newstalk.