Varadkar expected to call election before Dáil reconvenes on Wednesday 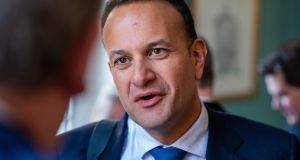 A general election which could be announced as early as Tuesday by Taoiseach Leo Varadkar. Photograph: Douglas O’Connor

Fine Gael and Fianna Fáil have been trading barbs on health, housing and the economy as both parties gear up for a general election which could be announced as early as Tuesday by Taoiseach Leo Varadkar.

Fine Gael sought to put the focus on the record of Fianna Fáil leader Micheál Martin, with Minister for Health Simon Harris, attacking Mr Martin for claiming to be an “agent of change” when he had been a senior minister at the time of the 2010 financial bailout and a TD when Charles Haughey was leader of the party.

Mr Martin replied that Mr Harris “needs to concentrate on alleviating the pressures and the hurt and the harm on people in our emergency departments, not trying to take cheap potshots at other politicians”.

The Fianna Fáil leader also again ruled out asking Sinn Féin to join a coalition government after the election.

Political sources expect the election to be called either on Tuesday or Wednesday, but politicians from all parties are already in campaign mode

But Sinn Féin leader Mary Lou McDonald said she will talk to and listen to everybody after the next poll “because that’s what adults do”.

She said Taoiseach Leo Varadkar and Mr Martin “do not want Sinn Féin about the place” because “they know full well that we will bring about change”.

“If Sinn Féin can govern in partnership with the DUP – people we have profound political differences with – how on earth is it logical to then say that Sinn Féin isn’t good enough to be in government in the south?”

Ms McDonald said that if Sinn Féin can “land at a space where we have a republican programme for government” then the party will “be in the business of entering government”.

Political sources expect the election to be called either on Tuesday or Wednesday, but politicians from all parties are already in campaign mode.

The Cabinet meets at Government Buildings on Tuesday morning in what is increasingly expected to be its final meeting. The Dáil is due to reconvene after the Christmas recess on Wednesday, but if Mr Varadkar seeks a dissolution from President Michael D Higgins on Tuesday, the campaign will begin in earnest.

Alternatively, some political sources speculate that Mr Varadkar could wait for the Dáil to meet on Wednesday and announce he intends to seek a dissolution. He is also due to meet European Commission president Ursula von der Leyen in Dublin on Wednesday.

Elsewhere, the Independent Alliance, part of the Fine Gael-led Government since 2016, appeared to be falling apart, with junior minister Kevin “Boxer” Moran announcing he is quitting the group to run as an outright Independent.

The Alliance was set up principally by Minister for Transport Shane Ross before the last election.

It counts two other junior ministers, Finian McGrath and John Halligan, among its members, though neither has yet confirmed they will stand again. Mr Halligan is not expected to run.