Unlikely next government will rely on confidence and supply, say SocDems 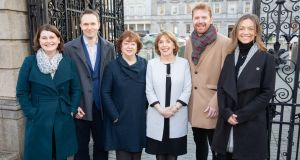 The Social Democrats leadership has expressed the view it is unlikely that the next government will rely on a confidence-and-supply arrangement.

Catherine Murphy and Róisín Shortall have also expressed doubt over the feasibility of a minority government that had no support arrangement such as confidence and supply in place.

Ms Shortall also said she thought a minority government that was not relying on any support agreement from others was also “unlikely at this stage”.

Asked if they would continue as co-leaders, Ms Murphy said this issue would form part of a constitutional review next year, but pointing to the party’s new TDs said, so far, it had been a “winning formula”.

Ms Shortall said that a centre-left government would be its preference, but the question was whether the numbers were there or not.

She said the talks were very much at an exploratory stage and that they would meet a number of leaders on Wednesday, namely Mary Lou McDonald of Sinn Féin; Micheál Martin of Fianna Fáil; Eamon Ryan of the Greens; and Brendan Howlin of Labour.

“From our point of view it’s all about a policy platform,” said Ms Shortall, saying the issues of housing, health and childcare needed to be resolved.

Ms Murphy said there would have to an agreed policy programme that was “all about outcomes and timelines”.

“It’s not just a question of a list [of priorities],” she said. “The trajectory for the likes of Sláintecare . . . we have to look where delivery will be. It’s exactly the same way with affordability of housing

“It’s wider than just naming a topic. It’s about how that will play out as well, with very clear timelines.”