'The numbers aren't there': Sinn Féin’s preferred left-leaning coalition gets a cool reception 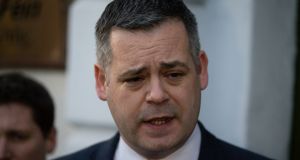 Sinn Féin’s attempts to pull together a government that excludes Fine Gael and Fianna Fáil have begun to stutter, with smaller parties expressing scepticism such a coalition can be put together.

Sinn Féin leader Mary Lou McDonald would need to bring most of the 20 Independents in the new Dáil into government, as well as the Green Party, People Before Profit-Solidarity, Labour and the Social Democrats, to command a majority.

Several Independents have indicated a willingness to serve in government provided their demands are met.

It comes as Micheál Martin began to make contact with the leaders of the smaller parties yesterday, and a Fianna Fáil-led minority administration underpinned from Opposition by Fine Gael is not being ruled out by senior Fianna Fáil figures.

Mr Martin would have the numbers in the Dáil if he won the support of the Greens, Labour, Social Democrats and some Independents and got Leo Varadkar to commit to a confidence-and-supply arrangement.

But Labour leader Brendan Howlin is expected to tell his parliamentary party today that his party, which won six seats, did not achieve enough critical mass in the election to enable it to enter government. Sources said Mr Howlin would leave open the prospect of Labour supporting a government from opposition on a number of key policy areas, such as housing.

Sinn Féin yesterday appointed a negotiating team, to be led by finance spokesman Pearse Doherty, which will seek to begin meetings with smaller parties and Independents on Wednesday.

Solidarity-People Before Profit TD Richard Boyd-Barrett said he did not believe there would be sufficient TDs for an alternative coalition of progressive parties led by Sinn Féin.

Social Democrats joint leader Róisín Shortall also said it appeared that the “numbers aren’t there” to construct a government without Fine Gael or Fianna Fáil.

The Green Party met on Tuesday morning and agreed to talk to all other parties. A source said “serious action on climate change and biodiversity loss” would be a red line for entering government.

While many Independent TDs seemed enthusiastic for participation in government, some also outlined significant demands in return for their support. The Cork South-West TD Michael Collins said he would insist on a new and dedicated ministry for fisheries. He also wanted to see a rural resettlement programme and said he would “not support any crowd” that had a role in a potential downgrading of Bantry Hospital.

Sources in both Fianna Fáil and Fine Gael say they will stay out of the way and let Sinn Féin try – and fail, most expect – to put together a coalition.

Few TDs expect that the Dáil will elect a taoiseach when it meets on February 20th.

If Leo Varadkar is not elected taoiseach, he will resign his post, but he and his Ministers will continue in office as a caretaker Government until the Dáil approves their successors. There is no time limit on the period in which a caretaker government can hold office.