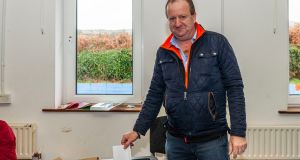 The Independent TD Michael Collins said Shane Ross had “ruined rural Ireland,” adding that the “great people of Dublin took him out of it.” Photograph: Andy Gibson

Addressing supporters after his re-election in Cork South West, Mr Collins said Mr Ross’s failure to retain his seat in Dublin Rathdown had left him “on the scrap heap of Irish politics”.

“One the biggest scumbags in Irish politics. He ruined rural Ireland, ” he said, adding that the “great people of Dublin took him out of it.”

Speaking to Sean O’Rourke on RTÉ Radio One, Mr Collins apologised for his remarks.

“I usually play the ball and not the man or woman in politics, that is my style,” he said.

“It wasn’t probably good enough and I do apologise for that type of word - that’s not me.”

Mr Collins said he “had very little drink” taken but “was totally exhausted” after “a hard three weeks”.

The slur was “over the top” and made “in the heat of the moment” after speaking to voters who were “absolutely furious” with decisions made in Dublin against the interests of the people of rural Ireland, he said.

Mr Ross said he accepted the apology and understood “as well as anyone else” the “very colourful language in political life” that can be used “in the heat of battle”.

“I saw the tape, and I saw how excited he was and probably tired as well in the heat of victory and of course I accept his apology,” he said.

“He has withdrawn it. I acknowledge his admission it was wrong.”

Mr Ross defended his clampdown on drink-driving during his time in office, adding that it had been used by some as an attack on rural Ireland.

But, he said, the statistics show a majority of road deaths happen in rural Ireland and the declining number of deaths showed the road safety measures he introduced “saves lives in rural Ireland”.

Mr Collins said “God only knows what causes deaths on our roads” and that the drink-driving legislation was “never rural proofed”, but introduced without any public transport provision.

The reelected TD has had a high profile as a member of the Rural Independents grouping in the Dáil from organising buses to take patients to Belfast for cataract procedures.

When the Taoiseach Leo Varadkar criticised fellow Independent TD Noel Grealish over his claims that African migrants were “sponging off the system”, Mr Collins defended his right to raise the issue.