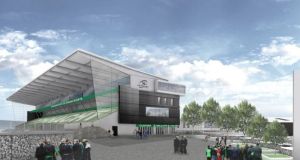 A CGI view of the redeveloped Sportsground provided by Connacht Rugby.

Taoiseach Leo Varadkar has pledged an extra €10 million to Connacht Rugby to build a new stadium over and above the limits of a grant scheme from Minister for Sport Shane Ross.

The announcement came on Friday evening amid renewed speculation in recent days that Mr Varadkar may call a snap general election.

Last month Mr Ross decided to award €10 million each to Leinster and Connacht for their plans to build or refurbish stadiums, along with €1.5 million to Munster Rugby for floodlighting and an indoor training centre.

However, he refused to meet Connacht’s demand for an extra €10 million for its project, arguing that rugby could not be given a greater share of the €77 million sports infrastructure grants that were announced yesterday given other demands.

It has been known in Government circles that Connacht was unhappy with the limit put in place by Mr Ross, and Government sources said Mr Varadkar gave the go ahead for the additional €10 million, but insisted the decision is “fully justified” because Connacht’s application was the “second highest scoring project”.

Sources said talks have been ongoing between Connacht and figures on the Fine Gael side of government and the move was announced yesterday by Sean Kyne, the Government chief whip, and Hildegarde Naughton, who are both local party TDs. Mr Kyne, a minister in the Taoiseach’s department, was particularly cited by club officials.

A decision was made to find additional money for Connacht elsewhere, above Mr Ross’s grant, and it is understood that the funds will come from the Government’s Project Ireland 2040 plan.

The pledge to Connacht Rugby by the Taoiseach will be made in writing so that the club can borrow a further €10 million to complete the 12,000-seater stadium at its Sportsground home on College Road in Galway.

Saying the decision had prompted, “great excitement”, the club’s chief executive, Willie Ruane said in a statement last night that he wanted to “fully acknowledge the very significant support” received from the Taoiseach.

In his announcement yesterday, M Ross said the €77.4 million given to 25 projects had been decided “following a rigorous assessment process with the highest scoring applications receiving grant offers”.

“The fund provides a robust and transparent mechanism for the allocation of funding to develop the best high quality sports facilities across all regions,” Mr Ross said.

Two projects in, or near to Mr Ross’s constituency – the Beckett Civic Centre and the Tibradden Road sports centre will receive more than €10 million.

Last May, Mr Varadkar, along with Ms Naughton and Government Chief Whip Sean Kyne, were told during a visit to Galway that the new stadium could not be financed unless the State put up €20 million.