Stephen Collins: Howlin can bow out with some satisfaction 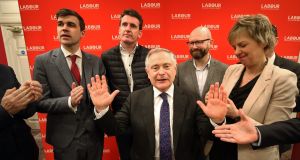 Labour leader Brendan Howlin with party colleagues following his announcement that he would not contest the forthcoming leadership competition. Photograph: Nick Bradshaw

Brendan Howlin’s decision to stand down as leader of the Labour Party came as no surprise. He took over the leadership reluctantly four years ago after his party endured an electoral disaster and agreed to take on the task only because most of the surviving party TDs pleaded with him to do so.

Last week’s election was another difficult experience for Labour but the party just about managed to survive the Sinn Féin deluge, coming back to the Dáil with six seats. While former leader Joan Burton and former minister Jan O’Sullivan lost their seats the party managed to get three young candidates over the line.

Although it is smaller, by one TD, the age profile of the Labour parliamentary party has changed dramatically with the addition of three TDs in their 30s. It is against this background that Howlin decided it was time to pass the baton to a new generation. Whoever succeeds him will face a mammoth task in attempting to rebuild the oldest party in the State.

Howlin was steeped in the Labour Party tradition. His father John, a trade union official in Wexford, was the right-hand man of Brendan Corish, who led the party from 1960 until 1977. John Howlin was a Labour member of Wexford Corporation for 18 years and was election agent for Corish for decades.

Brendan Howlin was named after Corish and he was proud of continuing the Labour tradition in Wexford which began before the foundation of the State with the election of Corish’s father Richard to the Second Dáil in 1921.

Born in May 1956, Howlin was grew up in Wexford and attended the local Christian Brothers secondary school before going on to train as a national teacher in St Patrick’s College, Drumcondra. When Brendan Corish decided not to run in the snap general election of February 1982 the 25-year-old Howlin was nominated to run in his place. He failed to hold the seat for Labour in that election and the subsequent one in November 1982.

However, he was nominated to the Seanad by Dick Spring and quickly became a national figure defending Labour’s record in the government headed by Garret FitzGerald and Spring. A stint as mayor of Wexford in 1986 helped to cement his political reputation in the constituency.

He made it to the Dáil as one of the 12 Labour TDs elected in adverse circumstances in 1987 and held the Labour seat in Wexford at every election since then. After his election he quickly became a prominent figure in the party and was one of drivers of the hugely successful election campaign in 1992 which saw Labour win 33 seats.

When Labour concluded a coalition deal with Fianna Fáil after the 1992 general election he was appointed to the cabinet as minister for health in the government led by Albert Reynolds.

When that government collapsed in dramatic circumstances in November 1994 and Labour formed a new coalition with Fine Gael and the Democratic Left he was appointed as minister for the environment. He was a close ally of Spring during their years in government and backed his leader’s decision to walk out of government with Fianna Fáil.

When Spring resigned after Labour’s poor performance in the 1997 general election Howlin ran for the leadership against Ruairí Quinn. He had the backing of Spring and the party establishment but was defeated by the older man. He was bruised by that defeat but worse was to follow.

When Quinn stepped down after failing to make it into government in 2002 Howlin again threw his hat into the ring. This time his opponent was former Democratic Left TD Pat Rabbitte and given that the election had been opened up to the party membership there was a wide expectation that he would win. However, Rabbitte won over a majority of party members with strong and witty performances at a series of hustings and Howlin was defeated for a second time.

It was no secret that he was opposed to Rabbitte’s policy of ruling out coalition with Fianna Fáil. When Labour again failed to make it into office he was elected to the position of leas cheann comhairle with the backing of Fianna Fáil.

After the collapse of the Fianna Fáil government under the pressure of the financial crash in February 2011 Labour won a record 37 seats. Howlin was back in the cabinet as minister for public expenditure, the most important post he filled during his political career. He was widely regarded as having done a fine job in very difficult circumstances. managing to keep public spending under control while avoiding widespread industrial unrest in the public service through negotiated agreements with the unions.

After the election disaster of 2016 when Labour was reduced from 37 seats to seven he was prevailed upon to let his name go forward for the leadership. The alternative candidate, Tipperary TD Alan Kelly, was regarded at that stage as being too volatile by his colleagues in the parliamentary party and could not get a seconder.

Howlin faced an uphill battle in attempting to rebuild Labour support and last weekend all the party could do was to cling on. Howlin can take some small satisfaction from that but his successor will have a huge task on his hands in attempting to make Labour a force in the land once more.