David Cullinane, who topped the poll for Sinn Féin in Waterford, declares "up the Republic, up the RA." 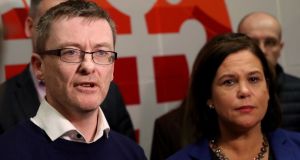 Sinn Féin TD for Waterford David Cullinane has said his pro-IRA comments at the end of a victory speech in Waterford after his election were “about the past . . . not about the future” and that he did not feel he had anything to apologise for.

However his party leader Mary Lou McDonald said the controversy was a distraction from the process of forming a government and urged her TDs not to make comments that distracted from the party’s agenda.

In an address to supporters at a republican meeting in Waterford Mr Cullinane shouted “Up the ‘Ra”. He recalled that one of the ten IRA hunger strikers who died in 1981, Kevin Lynch, had been a H-Block election candidate in Waterford in 1981.

At the end of the speech, he shouted: “Up the Republic, Up the ‘Ra. Tiocfaidh ár Lá.” The address to supporters was filmed on a camera phone and has been posted on Twitter.

Speaking to journalists ahead of a meeting of the party’s ard comhairle in Dublin tonight, Mr Cullinane said: “Yesterday was a very emotional day for me . . . It was a long count and obviously we were very excited and very proud of the vote we got yesterday in Waterford. The 30-second clip was part of a longer speech that I gave where I was reflecting back on the hunger strikes, reflecting back on the fact that Kevin Lynch (the hunger striker) stood in the Waterford constituency in 1981. He was someone who inspired me and inspired I think many republicans. The comments were made in that context.

“I know some people will think and maybe some people in the media will think that this was a comment about the here and the now and the future. They weren’t, it was reflecting back on that time in Irish history that I’m proud of and those hunger strikers and it was I suppose part of the excitement of the night when we were celebrating that victory,” he said.

“But my comments were about the past, they’re not about the future. The IRA is gone as everybody knows, and I celebrate that, the same as anybody else.”

Asked if he felt he needed to apologise, Mr Cullinane said: “I don’t feel I have to apologise for reflecting back on that time period. What I’m saying is that I’m putting context on the comments that I made - I in no way meant that this was about the here and the now or the future.”

It was, he added, “in the context of a long day and a long night.”

“I certainly don’t set out to offend anyone, that’s not my style. I’m very proud of that republican legacy but I’m also very proud of what these people behind me can do over the next while if we’re given the opportunity,” he said.

Ms McDonald said that the comment would not have any effect on government formation talks, “but I do accept that they can serve as a distraction . . . I’ve asked everybody not to be making throwaway comments or comments that can be misconstrued or distract us from the work ahead, and I know that’s what happened in David’s case.”

She said however, “I’m not their mammy, and I don’t censor them either. We’re all adults and I do expect people to behave in an adult way and to co-operate with their dear leader and not to create distractions. But let’s not get overexcited on this.”

Earlier on Monday evening Mr Cullinane told The Irish Times he fully stood over what he had said at the rally, saying his audience, like him, were republicans.

“I have never distanced myself from the IRA, or from Bobby Sands and the people who died on hunger strike, or for those who, over 100 years, were involved in the armed struggle.

“That is no Secret. I have no problem saying that,” he said. “I have never had any difficulty with people taking a stance.”

Asked would the phrase ‘Up the ‘Ra’ be considered insulting to some people, he said: “We are a united Ireland party and we have never distanced ourselves from that.

“I do not agree with everything that the IRA did but I would not distance myself from it.”

In the address Mr Cullinane referred to Mr Lynch, from Dungiven in Co Derry who died in the H-Blocks in 1981 after 71 days of fasting.

“(Mr Lynch) was the H-Block candidate here in this constituency,” he said.

“And what a fantastic moment it must be if his family is watching on, and people in the North are watching on, to see Sinn Féin get over 20,000 first preference votes in this constituency.

“Up the Republic, Up the Ra and Tiocfaidh ár Lá,” he shouted.