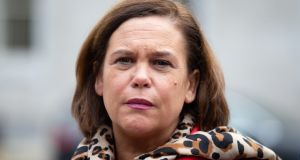 Sinn Féin leader Mary Lou McDonald has said she is not underestimating the challenge facing her party in the general election but pledged it will be “very different” to last year’s local election campaign.

“Every election campaign is about convincing the people, voter by voter, and there’s no room for complacency or certainly arrogance, but I’m very confident that we have a very strong slate of candidates. We’ve got a very strong policy platform and we look forward to taking that to the doorsteps.”

“It will be very different [to the local election], obviously we have listened. We’ve listened very carefully, we’ve learned. I think we’ve been very honest with each other and with ourselves. And I think in the course of this campaign you will see a very clear policy platform for people, for workers, for families, for those people who, as I say, hear the rhetoric of economic recovery but aren’t experiencing it in their lives.”

Ms McDonald also said she believes Fine Gael can not defend its “desperate record” on housing in the forthcoming campaign.

“I think most people are dealing with the entrails of Fine Gael’s past, and their past performance, and I think it is very difficult to convince us or anyone else that Fianna Fáil or Fine Gael will do anything differently than they did before, their track record is plain to see.”

“We are into the election now because the Government know that they can’t continue defending their desperate record in terms of housing provision, and so the Fine Gael and Fianna Fáil coalition has collapsed.”

“What we will do is get onto the doorsteps and get talking to people and give people an opportunity to make a change.”