Prospect of new government being formed in near future in stalemate 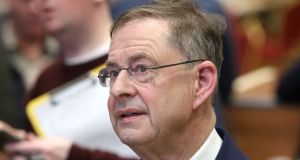 Fianna Fáil’s Galway West TD Éamon Ó Cuív has said he and “significant people” in the party are opposed to a coalition government with Fine Gael and the Green Party.

“The public voted for change, we said we weren’t going in with Fine Gael, we said we were for change, and that there was a need for a change of government,” he told RTÉ Raidió na Gaeltachta. Mr Ó Cuív said that he had some support for this stance at a parliamentary party meeting on Thursday, but wouldn’t be drawn on names. “Some people supported me. A minority in the parliamentary party were uncomfortable with this arrangement (with Fine Gael and Greens) ... significant people.”

Efforts to form a government have reached a stalemate after a three-way tie between Sinn Féin, Fine Gael and Fianna Fáil. Fianna Fáil has the highest number of seats, followed closely by Sinn Féin which gained the highest percentage of first-preference votes. However, the other two parties are refusing to consider sharing power with them.

Sinn Féin doesn’t have enought seats to form a left alliance with smaller parties without Fianna Fáil and Fine Gael and as options narrow Fianna Fáil leader Micheál Martin has said a second general election in 2020 cannot be ruled out . On Thursday, his party backed Mr Martin’s plan to reject any coalition with Sinn Féin and to pursue talks with other parties – widely received by his own TDs as an effort to negotiate a coalition involving Fianna Fáil, Fine Gael and the Greens.

Speaking on the Adhmhaidin programme this morning, Mr Ó Cuív said he was opposed to this. “Fianna Fáil intends to go into coalition with Fine Gael and the Greens. If you look a the figures, that’s the only option that gives you a majority ... I’m against that, completely against that, and I made that known at the meeting.”

He said that there would be a meeting of the Fianna Fáil Galway West Executive in Moycullen next week to discuss the matter, before it is presented to an ardfheis. Mr Ó Cuív also clarified that what is proposed is a coalition, not a confidence and supply agreement. “A coalition is what is proposed, Fine Gael is not going into a confidence and supply agreement”.

Speaking on Friday, Sinn Féin leader Mary Lou McDonald was critical of what she called the “old boys club” of Fine Gael and Fianna Fáil, who she said by refusing to consider government formation talks with Sinn Féin “believe they are entitled to hold power” between themselves.

“So if we have to fight another election okay let’s have the election, but what needs to change here is the mindset, the mentality, the sense of entitlement that Fianna Fáil and Fine Gael hold, that day is over,” she said.

Ms McDonald said her message to smaller parties such as the Greens or the Social Democrats would be “don’t give way” to approaches to form a coalition with Fine Gael and Fianna Fáil.

Ms McDonald said she intended to call Mr Martin on Friday to press him to sit down and talk about forming a “government of change” with Sinn Féin. “I will be saying to him that we need to sit down and talk, not to shoot the breeze or to exchange Valentines Day greetings, but to actually get down to the real business of the day,” she said.

“And that is about creating, fashioning a government of change, and nobody gets off the hook on their responsibilities in this regard simply because the mathematics is difficult,” she said.

“I haven’t heard anybody dispute the fact that the majority of people who voted would regard a return of Fine Gael and Fianna Fáil as a disaster,” she said.

The two parties were “insisting that they and they alone are allowed to hold power,” Ms McDonald said.

Sinn Féin earlier admitted it cannot form a stable government without either Fianna Fáil or Fine Gael, who it accuses of “arrogance” and “recklessness” for refusing to talk to the party about a coalition.

Eoin Ó Broin, one of Sinn Féin’s government formation negotiators, said Mr Martin is doing the “most irresponsible thing” by snubbing Sinn Féin’s voters and suggesting a new grand coalition government that was rejected at the ballot box.

Asked how Sinn Féin can form a government without either Fianna Fáil or Fine Gael, he said: “You can’t.”

Mr Ó Broin said: “The most irresponsible thing to do is what Micheál Martin has said — to say he won’t talk to a party that now represents 24 per cent of the electorate.

“He’s talking about putting back in power the government that has just been booted out of power and he is threatening another election at a time when the public want politicians to do their job, form a government for change and start fixing the problems that Fianna Fáil and Fine Gael created through four years of bad government.”

Mr Ó Broin said political parties refusing to talk to others and who are “threatening” elections “don’t just smack of arrogance but I actually think there is a certain recklessness”.

People “can’t wait” for the housing and health crisis to be resolved, he told RTÉ’s Morning Ireland.

“It is very clear that the only stable government is going to involve two of the larger parties,” he added.

Despite “huge policy differences” between Sinn Féin and Fianna Fáil, the “only responsible thing to do for any party is to sit down with and to talk” with all other parties, Mr Ó Broin said.

The Dublin Mid-West TD said Sinn Féin was still awaiting a “formal response” from Mr Martin ruling out coalition talks, but suggested the Fianna Fáil leader may yet change his mind.