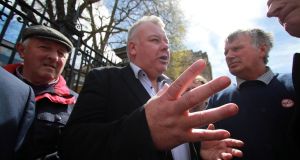 In Roscommon-Galway, Michael Fitzmaurice took the first seat on the first count, exceeding the quota by 1,637 first preferences, increasing his vote by more than 7 per cent on the last general election. File photograph: Nick Bradshaw

The final seat in the Roscommon-Galway constituency was filled shortly after 1pm on Monday afternoon following the sixth and final count at the Dr Hyde Centre in Roscommon.

Sinn Féin’s Claire Kerrane (27) has become her party’s first TD in Roscommon in 97 years. Though receiving only a third of Independent Denis Naughten’s transferable surplus, she was able to defeat sitting Fianna Fáil TD Eugene Murphy by a margin of just over 1,300 votes.

Counting was deferred at 1.45am on Monday due a power outage. The count was adjourned following the election of Mr Naughten, who took the second seat on the fifth and penultimate count, exceeding the quota following the elimination of Fine Gael’s Aisling Dolan – despite a drop in his first preference vote by over 12 per cent.

This election is the first in Roscommon since 1922 that neither Fianna Fáil nor Fine Gael won a seat. Ms Kerrane’s election also marks the only the second occasion for a female candidate to be elected in Roscommon and the first since 1981 as she increased her party’s vote by just over 10 per cent.

Fianna Fáil saw Mr Murphy lose his seat after being eliminated on the final count. The party’s support dropped by just under 2 per cent, despite the late addition of Cllr Orla Leyden, daughter of former minister of state, Senator Terry Leyden to their election ticket.

Despite a drop of 2.93 per cent in their first preference vote, Fine Gael’s Aisling Dolan polled a respectable 5,466 first preferences, consolidating the party’s core support after running mate Senator Maura Hopkins withdraw from the election a week before polling.

The Green Party also enjoyed a rise in support through first-time candidate Julie O’Donoghue, who increased her party’s support almost five-fold before being eliminated on the third count with an encouraging 1,610 votes.