Fianna Fáil-Fine Gael coalition would be ‘slap in the face’ for voters, Sinn Féin leader says 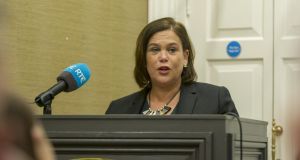 The prospect of a new government being formed in the near future receded towards stalemate last night as Fianna Fáil TDs endorsed party leader Micheál Martin’s refusal to discuss a coalition with Sinn Féin.

Privately many Fianna Fáil TDs concede this is likely to lead to coalition discussions with Fine Gael, while the Sinn Fein leader Mary Lou McDonald said that such any such “grand coalition” would be “a slap in the face” for the electorate which voted for change.

Fianna Fáil TDs agreed that Mr Martin should now pursue talks with other parties, though several senior party sources said any substantive discussions with Fine Gael were unlikely to happen for some time. There has been no formal contact between the two parties.

Instead, Mr Martin is to open talks with the smaller parties and Independents. Last night he held a preliminary meeting with the Social Democrats leadership.

Mr Martin argued at a lengthy parliamentary party on Thursday – at which over 30 deputies spoke, sources said –that Fianna Fáil could not “stand on the sidelines” and there was an obligation on it to lead a government.

He told Deputies that unlike Fine Gael it was not Fianna Fáil’s intention to enter opposition, rather to try and lead a new government comprised of like-minded parties.

While a small number of Deputies said they remained open to talks with Sinn Féin, a majority of the party’s 38 TDs backed Mr Martin’s plan to seek to form a government without Sinn Féin participation.

Shortly before the Fianna Fáil meeting began, newly elected Sinn Fein TDs also gathered nearby to discuss the prospects for government. However, the party’s chances of entering a government were dealt a blow by the Fianna Fáil decision to rule out coalition with Mary Lou McDonald’s party.

A so-called grand coalition between Fianna Fáil and Fine Gael would be the “worst outcome” and “a slap in the face” to the voters, Ms McDonald warned.

“I cannot imagine who would be prepared to facilitate these two parties back into government for more of the same,” she said.

Addressing the media at Leinster House later, Ms McDonald challenged Mr Martin to sign up to her party’s programme for change. Her preferred choice was a government without Fianna Fáil or Fine Gael, she said, but “I accept that the numbers make that very difficult”.

She said there were huge differences between Sinn Féin and Fianna Fáil but “the question is whether Fianna Fáil can be part of, commit to that appetite for change and new politics and good delivery for citizens on the ground”.

Later Mr Martin told RTÉ News that in a volatile atmosphere and with a fragmented political system, it would be very difficult for any party to form a government, and another general election could not be ruled out.

“We have to appreciate the changed environment and the country and its people need a government that can radically change.”

He said if a government was formed it would have to be a very “radical” one that would be capable of delivering results on housing, health, climate change and rural imbalance.