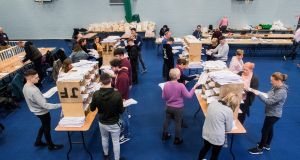 Count staff at the Phibblestown Community Centre in Dublin: While young people care about the climate, they want their politicians to focus on more immediate concerns. Photograph: Liam McBurney/PA

“It will come down to a decision of who I don’t like least,” said Mae Nicolaou, from her perch on a bench on the National College of Art and Design (NCAD) campus.

With less than 48 hours to go until polling, the student hadn’t yet made up her mind. But she seemed to be learning towards what Noam Chomsky called “lesser evil voting (LEV)” – a choice between, as he put it, “worse, and less worse”.

She wasn’t the only one thinking like that over the last three weeks. The idea that voters arrived at their decision by a process of elimination doesn’t sit easily with the narrative that what we are seeing is a youthquake, or a desire for a radical realignment of the landscape of Irish politics.

That there was an appetite for change is not in doubt. But throughout the campaign, what I heard from voters was a desire for change that was rooted more in pragmatism than idealism. I spent the campaign on the road, talking to voters and avoiding politicians, and found echoes of this mood all over: on a local bus in rural west Waterford; at a book group in Simon Coveney and Micheál Martin’s constituency in Cork; a mart in Ennis; a baby swimming lesson in Dún Laoghaire; a men’s shed in Ramsgrange, Co Wexford; in Adamstown; a house share in south Co Dublin; the NCAD college campus; and the so-called “cataracts bus”, ferrying passengers from Cork to Belfast for procedures on their eyes.

But despite this, there was a sense that voters were limbering up to give someone else a chance; that they felt coalition and compromise – ironically now virtually the only certainties from the election – had not delivered for the country. This left them open to hearing a more decisive message about the future.

“I’d really just like a government to actually get on and do things. And not just go with the popular vote, fly the flag, see what the public response is . . . We all know in our heart and souls what needs to be done,” said Mary Downes at the book club.

One of the big questions for Fianna Fáil will be why the change bandwagon largely passed it by. From early on, it was clear that confidence and supply had done it few favours. Voters didn’t seem to give the party credit for much that had gone right; nor did it fully manage to escape blame for the things that hadn’t.

It’s tempting to say the groundswell of support for Sinn Féin emerged early on in response to the appetite for change. It didn’t. The Sinn Féin surge showed up in the polls before people on the ground were talking openly about it. Maybe the polls acted as a self-fulfilling prophecy; maybe they just gave voice to something that seemed unsayable just a few weeks earlier.

But it wasn’t until the last day of January, when my colleague Enda O’Dowd and I boarded the cataracts bus that we found them at last: the much-vaunted lifelong Fine Gael, Fianna Fáil and Labour voters who had decided to “give Mary Lou” a chance.

It was almost always “Mary Lou”, rather than Sinn Féin. She became the party brand, in a way that neither Leo Varadkar nor Micheál Martin were. Kathleen Chambers, a student in NCAD, described how McDonald had made it acceptable to support Sinn Féin: “I wouldn’t associate Sinn Féin with the IRA or the Troubles [now] as much as I would have when Gerry Adams was their leader.”

The party’s exceptionally strong performance was almost certainly also about a desire – by younger voters in particular – to shake up the binary political system they had inherited from their parents.

With the Repeal and marriage equality referendums, students had seen that change was possible. “Even some of them who would have been too young to vote in the referendum see what they can do now, and know that it’s up to them to create change,” said NCAD students union president Caelainn Kerrigan.

The parties of the left, and the Independents, will have benefited too, particularly from Sinn Féin transfers. But if you wanted to resoundingly reject the status quo, voting Sinn Féin– the third big party that the other two big parties didn’t see coming – was the way to do it.

From the beginning, it was evident that Fine Gael had misread the mood of the nation. There were going to be no gold stars for its handling of Brexit; few for steadying the ship on the economy.

There were going to be no gold stars for FG's handling of Brexit; few for steadying the ship on the economy

Health was the issue that seemed to most exercise voters of all demographics, everywhere in the country – exit polls show it determined 32 per cent of the vote. But just as they didn’t necessarily give Fine Gael credit for the economic recovery, voters didn’t always seem to hold it accountable for health – at least no more than they held Fianna Fáil accountable.

Health, said Maria Murphy at the Cork book group, “is a lost cause anyway”.

On housing and homelessness, the second-biggest factor at 26 per cent, there was more targeted anger against Fine Gael. In Dublin, I interviewed three professionals in their mid to late 20s, who despite good salaries, didn’t see any prospect of ever getting on the housing ladder.

They talked about one of Leo Varadkar’s missteps during the campaign, his comments about buying a house at 24. “That just seems really alien to us,” said Róisín, a 27-year-old teacher.

The other widespread misconception was that climate would be a factor. It turns out that young people care about the climate but actually want their politicians to focus on more immediate concerns. “We’re all concerned about climate, but it’s something we see as being beyond our government,” said Meabh Moynihan (24) in the houseshare in Dublin.

Away from the coverage of Sinn Féin’s surge, there seemed to be an equally strong desire to keep the party out of office. Thirty per cent of voters in the final poll said Sinn Féin was the party they least wanted to see in government. Some of this was down to the Troubles, the party’s stance on Paul Quinn and the Special Criminal Court. A lot of it was about question marks over its economic policies and readiness for government. “They talk the talk, but look what they do when they’re in,” said Ellen Carmody, on the cataracts bus. “When they’re above in the North, it’s no, no, no, to everything.”

If there was a single thread throughout the conversations with voters, it was that: conversation. The contrast to voter mood in advance of the British general election two months earlier was stark. There, you’d ask people what the issues were and how they intended to vote, and you’d get a three-word slogan in response: Get Brexit done. Can’t stand Corbyn. Bloody love Boris.

Ask the same question here, and you might as well pull up a stool, because you know you’re going to be some time. Whatever their perspective, Irish voters are still deeply engaged in the political process. They may tend to the pragmatic rather than the idealistic – they may even be a bit fatalistic about it all at times – but they’re rarely apathetic.