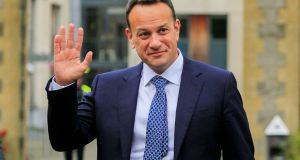 Taoiseach Leo Varadkar and Fianna Fáil leader Micheál Martin left their parties and the wider Dáil in suspense over the timing of the general election following a short meeting between the pair on Thursday night.

The hour-long, inconclusive meeting between the leaders of Fine Gael and Fianna Fáil comes as the Government is set to announce more than €50 million in regional sports grants today in a pre-election move said to be watched keenly by Mr Varadkar.

Sources said the spending announcements by Minister for Sport Shane Ross and Minister of State Brendan Griffin will be for larger infrastructural projects around the country, such as to Connacht Rugby and Finn Harps soccer club in Donegal.

Mr Varadkar and Mr Martin are due to meet again next week. Mr Martin wants an agreed election date after Easter but Mr Varadkar wants Fianna Fáil to commit to supporting the Government, rather than abstaining as it does under the confidence and supply agreement, in return. Mr Martin has ruled this out.

Speaking earlier on Thursday, Mr Varadkar said he believed he could remain in office if Fianna Fáil continued to abstain but acknowledged the Dáil numbers were “very precarious”.

However, he declined to answer on three occasions if the Dáil will reconvene on Wednesday after its Christmas recess. The Taoiseach said it was not a yes or no answer.

The view among Ministers and senior Fianna Fáil TDs, however, is that an election in February remains a strong possibility, particularly since the rural Independent group of TDs have said they will table a motion of no confidence in Minister for Health Simon Harris at the start of next month.

Mr Varadkar said he also intends to contact smaller parties and groupings in the Dáil to see if an arrangement can be reached to allow the Government continue.

However, Labour leader Brendan Howlin called on Mr Varadkar to “call a general election” and Green Party leader Eamon Ryan also said he believes it is time for a election.

An agreed statement by Fine Gael and Fianna Fáil last night said “the two leaders had a constructive meeting”.

“They discussed Dáil numbers and possible legislative proposals which could be passed in a further Dáil session. They agreed to consider matters further and to meet again next week.”

The two men are also understood to have discussed the talks to restore the Stormont institutions. Mr Varadkar also briefed the Cabinet.

Speaking after the Cabinet meeting, Mr Varadkar said a joint visit by British prime minister Boris Johnson and him to Belfast is “in the mix” if there is a successful conclusion to the Stormont talks ahead of the Monday deadline.

He is also said to have given Ministers a positive briefing on the state of play in the Stormont talks.

There was no formal discussion on the election at Thursday’s Cabinet meeting, but Ministers talked about it on the margins. Most, according to sources, felt a February election is likely but admitted to not knowing Mr Varadkar’s thoughts.

“In the absence of us being told anything, they are just assuming it,” said one, before adding of the Taoiseach: “He is very relaxed.”

Another said: “I thought the talks [with Fianna Fáil] would come to nothing and we’d be off.”